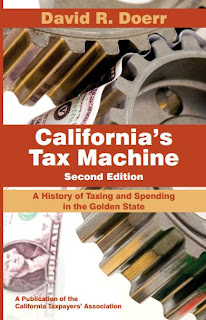 The Sacramento Bee today is reporting various news on the tax front.  As readers of this blog will know, there are three tax measures on the ballot: the governor's plan which the Regents recently endorsed, the Molly Munger school tax (Prop 38), and a close-corporate loophole tax (Prop 39). Folk wisdom has it that where there are too many measures on the same subject, voters may reject all of them in confusion.

In part to overcome that confusion, the legislature passed a bill that effectively put the governor's plan as the first initiative on the ballot (Prop 30). In order to do it by majority (not supermajority) vote, the bill was ostensibly made into a budget enactment by including a nominal $1,000 appropriation. This action was challenged in court by Munger - who feels her tax is being disadvantaged - and the Howard Jarvis Taxpayers Assn. - which is anti-tax.  Munger apparently dropped the challenge but the Jarvis group continued it.  There will be a hearing today, it is reported in the Bee.  See:
http://blogs.sacbee.com/capitolalertlatest/2012/07/california-legislature-submits-its-own-defense-of-ballot-reordering-bill.html

It is clear that Munger has the money to run a campaign for her tax. Apparently, the supporters of the close-corporate loophole tax have some money, too. They took a full-page ad out in the Bee:
Sac Bee Ad - 7-26-12 - Final

The state Democratic Party endorsed the governor's plan which is no surprise. It was less clear what it might do about the other two but it has now opposed the Munger tax and decided to be neutral on the third tax on corporate loopholes.  See:
http://blogs.sacbee.com/capitolalertlatest/2012/07/california-democratic-party-endorses-jerry-brown-tax-initiative.html

And there is also news related to the tobacco tax that narrowly lost on the ballot in June. A recount was requested and the result is to be reported today:
http://blogs.sacbee.com/capitolalertlatest/2012/07/am-alert-yes-on-proposition-39-campaign-throws-down-gauntlet.html


What does it all mean? All we can say is that no one likes the tax man:

Yesterday, while I was at work, my sister stole my iphone and tested to see if it can
survive a thirty foot drop, just so she can be a youtube sensation.
My iPad is now destroyed and she has 83 views.
I know this is entirely off topic but I had to share it with someone!

Stop by my blog ... how often should I take quantrim
My web site > Quantrim slimming

I all the time used to read article in news papers but now as I am
a user of internet so from now I am using net for articles, thanks to web.

I create a leave a response each time I especially enjoy a post on a site or if I have
something to valuable to contribute to the conversation.
Usually it's caused by the passion communicated in the article I browsed. And on this article "Taxes, Taxes: News on the Tax Front". I was excited enough to leave a thought :) I do have a couple of questions for you if you tend not to mind. Could it be simply me or do a few of these responses appear as if they are written by brain dead folks? :-P And, if you are writing on additional social sites, I would like to follow everything new you have to post. Would you list every one of your social pages like your Facebook page, twitter feed, or linkedin profile?

The functionality and beauty of candle could be a
terrific room decoration. Addition of art glass pieces into
any space. rooms and can add a relaxing, nature-inspired
touch for the room.