1935 Radio Report on Surgery at UC-SF 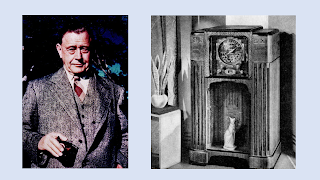 Yours truly stumbled across an old radio program from 1935 which featured a dramatized (played by actors) report on surgery to cure a "bearded lady" at UC-San Francisco.

The surgeon in question was Dr. Frank Hinman, Sr., who was evidently a big wheel in the field of urology at the time. See:

You can hear the program at the link below. I have shortened the musical introduction and conclusion and removed other segments of the program:

Posted by California Policy Issues at 10:32 AM No comments: The Wednesday morning (May 18) meeting of the Regents began with public comments at the full board. Comments covered UC admissions and the dropping of the SAT, financial aid for students, alumni engagement with UC, the Hawaiian telescope, the proposed Munger-designed dorm at Santa Barbara, labor issues, preservation of historic murals at San Francisco, divestment from Blackrock, anti-Semitism at Berkeley, the Parnassus project at San Francisco, COVID effects on students and employees, and the Peoples Park project at Berkeley.

After public comments, there were remarks by the chair of the Regents, the UC president, and the chair of the Academic Senate. I did not find anything new, exciting, or controversial in that part of the session.

The full board session was followed by a session of Public Engagement and Development. There was discussion of the multiyear budget "compact" between the governor and UC. But there was not discussion of the sad fate of previous such compacts when the budget outlook soured. Moreover, the 4% increase UC is proposed to get sounds good until you recognize that inflation is running around 8%. Thus, a nominal 4% increase is in fact a real decrease unless there is a drastic downward shift in the inflation rate. And if there were such a downward shift, it would probably be accompanied by a recession - with the budgetary problems that would follow.

Concern was expressed about the bill in the legislature that would require revenue sharing with college athletes. UC has opposed the bill, arguing that revenue sharing in money-making (male) football and basketball would take funds from other sports especially female sports. In any event, as we have noted in a recent blog post, that bill has been killed for now.*

As always, we preserve the Regents recordings. You can watch the May 18 morning session at the links below:

Posted by California Policy Issues at 8:31 AM No comments: 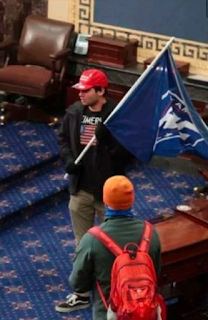 Blog readers may remember that a UCLA student was involved in the January 6, 2022 insurrection.* Ultimately, he was indicted. Below is the latest:

A far-right Republican leader at UCLA with white supremacist ties pleaded guilty Thursday after admitting to sitting in Vice President Mike Pence’s chair in the Senate during the Jan. 6 Capitol breach. Christian Secor, a member of America First Bruins, admitted to obstructing an official proceeding — namely Congress’s certification of the election of Joe Biden — in a plea deal with U.S. prosecutors. The charge carries a maximum of up to 20 years in prison, but prosecutors and Secor’s defense attorney agreed that he likely faces either 21 to 27 months or 53 to 61 months in prison under advisory federal guidelines, depending on whether he is deemed to have caused property damage or injury. He is scheduled to be sentenced Oct. 7.

Prosecutors agreed to drop the rest of a 10-count indictment, including two felony counts of assaulting police and rioting, and not to bring a new charge of destroying digital evidence as threatened against the 23-year-old. “The defendant entered the Senate Floor at approximately 2:49 p.m. The defendant then made his way to the Senate Dais and sat in the seat that had been occupied by Vice President Mike Pence approximately 30 minutes earlier,” prosecutors said in plea papers signed by Secor.

While he and other rioters were present there and inside the Capitol, “the joint session to count and certify the votes of the Electoral College for the 2020 Presidential Election could not continue,” Secor acknowledged. According to charging papers, Secor belonged to America First, a podcast group launched by Nicholas J. Fuentes, a far-right activist who joined the crowd outside the Capitol on Jan. 6 and organized a Nov. 11, 2020, rally in Michigan. The FBI affidavit identified Fuentes as a white supremacist and “public figure known for making racist statements and denying the Holocaust.” The affidavit said his followers are known as “Groypers.” Fuentes has not been charged. Fuentes has told The Washington Post that he isn’t a white supremacist and that he never denied the Holocaust.

The FBI said Secor described fascism as “epic” on Twitter; valorized the 2017 “Unite the Right” torch rally in Charlottesville during which marchers yelled anti-Semitic chants; and repeated anti-Semitic tropes suggesting Jewish influence over governments and “Westerners.” At the Capitol, Secor carried a large blue “America First” flag, joined a group of rioters who entered the west side of the building at 2:26 p.m. through the broken Senate wing doors, and walked through the offices of Speaker Nancy Pelosi (D-Calif.), he admitted in plea papers. He then overwhelmed three police officers trying to bar the Columbus doors on the building’s east side, helping push it open at about 2:38 p.m., he admitted.

Earlier, Secor texted and tweeted his belief after the November 2020 election that “Trump will pull through by legal or illegal means,” and that if he did not, Republican governors should prepare secession papers, according to plea papers. He messaged another individual on the eve of the Capitol riots, “Wouldn’t be surprised if conservatives just storm the police and clobber antifa and the police but that’s wishful thinking,” he acknowledged.

Posted by California Policy Issues at 9:24 AM No comments: 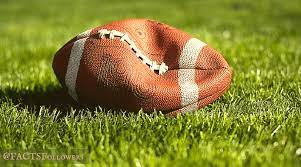 An earlier blog post noted a bill in the legislature that would have created a revenue sharing fund for college athletes. That bill is now dead. See below:

Incomplete pass: California bill that would have changed college sports stalls in committee

A California Senate bill that would have radically changed the economics of college sports in California failed to pass through the Appropriations committee on Thursday — a major legislative victory for Division I universities in the state. The development means SB-1401, the “College Athlete Race and Gender Equity Act,” is dead for the Senate’s current legislative session. Sponsored by Senator Steven Bradford, the bill had immense support from the National College Players Association (NCPA), an athlete-advocacy group led by former UCLA linebacker Ramogi Huma.

The NCPA, which is backed by the U.S. Steelworkers, could push forward new legislation in 2023 with the same goal: To give football and basketball players a slice of the cash they help generate. On its Twitter feed, the NCPA stated: “Unfortunately CA SB 1401, which would pay college athletes w degree completion funds, was held in committee & won’t go forward. The legislative session isn’t over however, we’ll keep you updated. Thanks to @SteveBradford for authoring this bill and fighting for our rights!”

Had SB-1401 become law, it would have created a revenue-sharing arrangement between California universities and athletes in the money-making sports. Millions of dollars typically used to support athletic department operations instead would have been moved into “degree completion funds” for the players. Those requirements would have placed California schools at a significant financial disadvantage, created Title IX complications and threatened the long-term viability of Olympic sports.

Asked for a reaction to SB-1401 stalling in committee, an industry source offered the following response: “While most view this bill, and college athletics generally, through the lens of high-major football and men’s basketball athletes, this outcome is a win — for now — for the other 80 or so percent of student-athletes in the state, especially women’s athletes, as well as non-power programs. “This bill would have eviscerated non-revenue sports in California and disproportionately harmed women’s athletes.”

An analysis published by the Appropriations Committee projected an economic impact of $34 million to $36 million annually for the University of California and $1 million to $9.3 million annually for the California State University. The CSU’s analysis also concluded that “the redistribution of revenues will be disproportional to male and female athletes and could cause its institutions to be out of compliance with federal Title IX requirements.” The Pac-12 declined to comment.

Posted by California Policy Issues at 9:04 AM No comments: 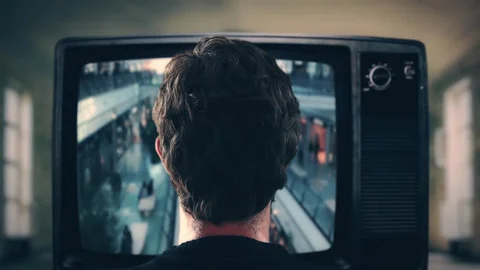 The Regents meetings this week began on Tuesday with a meeting of the Investments Committee. The meeting opened with public comments on UC admissions standards and the dropping of the SAT, state vs. out-of-state UC admissions, electrifying UC campuses in response to global warming, the Hawaiian telescope, textbook costs, the UC-San Francisco Parnassus project, and labor issues. Four students (3 in-person; one by phone) complained of anti-semitic incidents at UC-Davis and UC-Irvine. Apart from the general link below in which they are embedded, we provide a separate link to those four comments.

As for the actual subject of the day, investment returns, there was nothing unexpected. In a prior blog post, we noted that returns to the pension were negative in the first nine months of the current fiscal year ending March 31, thanks to the sinking stock market. We also noted that in our prior post that there would be gloomy results in the period after March 31 - and there were.* No one seemed particularly upset. However, such results - which inevitably will be mirrored at the larger CalPERS and CalSTRS pension funds, are likely to revive talk about underfunded public pensions.

There was some discussion as to why UC assets can't be used to finance UC campus building projects. It was said that such use would save money but that there were legal hurdles raised whenever the subject arose. It was decided to have a presentation on what those hurdles were at some future meeting.

As always, we preserve Regents meetings indefinitely since the Regents, for reasons unknown, delete them after one year. Links to the session are below:

Posted by California Policy Issues at 8:00 AM No comments:

A blog post yesterday contained some photos of the renovated Faculty Club. One comment on the post was a complaint that the wooden ceiling in the dining room had been painted.* The ceiling in the California room was also painted. We have a photo of that room from seven years ago (2015) below at the same Arts and Craft show, so you can compare ceilings and decide about the new paint. 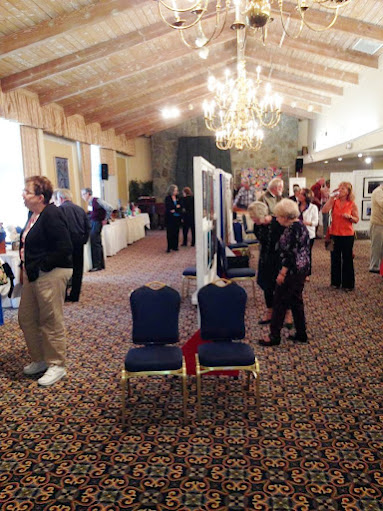 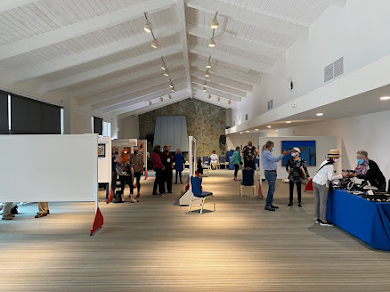 Posted by California Policy Issues at 7:53 AM No comments:

A Mascot You Can Milk for All It's Worth at Davis 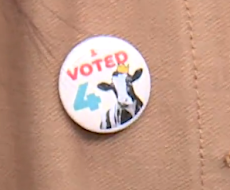 Team cow has triumphed over team horse at UC Davis. On Monday, the Cow 4 Mascot campaign declared victory in the vote over whether to change the university’s mascot with a 2,532 to 936 tally in favor. The campaign pushed to unseat Gunrock the Mustang and bring in a bovine instead. UC Davis students voted on the choice as part of their student elections last week. Voting ended on Saturday...

Of course, there is a long history of unusual naming of things by students. Santa Cruz has the banana slug as its mascot. Indeed, the students there have also named faults. Click below for details:

Posted by California Policy Issues at 7:30 AM No comments: