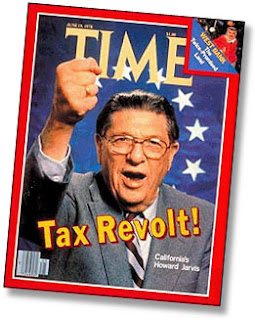 Most readers of this blog will know that Proposition 13, an initiative sponsored by Howard Jarvis (shown in the picture on the cover of Time) and Paul Gann, drastically cut local property taxes in 1978.  However, another feature of Prop 13 was adding a requirement that taxes could not be raised without a 2/3 vote of the legislature.  The 2/3 tax provision of Prop 13 was added to the Depression-era requirement for a 2/3 vote for the budget itself.

Voters in 2010 removed the 2/3 for budgets but not the 2/3 for taxes.  Indeed, they strengthened the 2/3 for taxes by making it more difficult to raise revenues by “fees.”  As a result of the voter action, for the past two years the state has had a budget in place on July 1 when the fiscal year commences.  However, the forecasts of revenue that underlie the budget do not have to be accurate or realistic.  There is a temptation to do what occurred last year and just assume revenue that seems unlikely to flow or that is uncertain at best.

The 2/3 requirement for taxes has been questioned in a lawsuit by former UCLA Chancellor Charles Young that is currently wending its way through the judicial process.  News accounts regarding this lawsuit have been sparse.  It is based on the distinction between revising the state constitution – which can’t be done by initiatives such as Prop 13 – or amending it (which can).  Were the Young lawsuit to succeed, it would drastically change the fiscal landscape in California.  At present, with a Democratic majority but not a 2/3 majority in the legislature, state taxes cannot be raised without some GOP support.  The last time that happened was in 2009 – and the renegade Republicans who went along with the tax increase were punished in various ways by their fellow party members making future renegade behavior unlikely.  The only way around the 2/3-for-taxes barrier is through ballot propositions which can be passed by voters by a simple majority and put on the ballot by voter petition.  That is why the governor’s tax plan is on the ballot in November rather than before the legislature.

The only recent news report on the Young lawsuit that yours truly has seen appeared on a conservative website by a representative of the conservative Pacific Legal Foundation.  As you might expect, he takes a dim view of the lawsuit.  You can find the report at: http://www.foxandhoundsdaily.com/2012/07/another-legal-misfire-against-prop-13/

A bit of history: