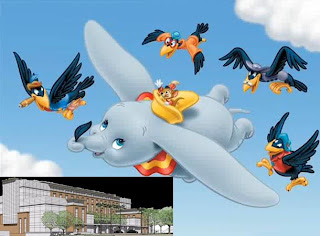 Approval by the Regents of the UCLA hotel/conference center in its present iteration may have been inevitable but it does not change the underlying economic reality of the project.  It either is a white elephant or it isn’t.  And the underlying economic reality goes beyond this specific proposal.  Whether the governor’s tax initiative passes or not, the long-term outlook for the state’s support for UC is not bright.  In an earlier post, this blog reproduced a chart from the UCLA Anderson Forecast showing the growing California  job gap between the pre-1990 trend line and the actual results.  Moreover the chart showed a projection to 2022 with the gap widening.

Similar results can be seen in other projections for the state.  California is simply not expected to grow in the future at rates comparable to its “Golden Age” in which the Master Plan was embedded.  The symptoms are all around.  For example, state politicos were surprised to learn after the 2010 Census that California was getting no increase in its congressional seats because its population had not grown sufficiently.  Even the state’s Department of Finance was surprised; it had estimated California’s population to be roughly a million more than the 2010 Census revealed.

Expansion of capital projects and programs at UC as they occurred in the earlier Master Plan golden era is not realistic but there is inevitable momentum to push ahead regardless of the change.  The Regents, as trustees of UC, need to go beyond a building-by-building, program-by-program, approval process on a part-time, two-month interval basis.  And they need to look after, not just before, projects are OK’d.  What actually happens when the projects are completed?

It was interesting to hear the approval process for the UC-Irvine project that preceded approval of the UCLA hotel. (Audio available on a posting yesterday.)  In that project, questions were raised as to the cost per incremental square foot of an expansion of an existing building and were answered by obfuscation.  Yet what could be simpler than dividing the cost by the incremental square feet?  Nonetheless, despite the obfuscation, the project was approved.

After the UCLA hotel was approved, the third item on the agenda was the outlook for state support for future capital projects.  Not surprisingly, the outlook for state support was reported to be not good.  So UC is on its own for capital projects and if the projects turn out to be white elephants in the future, too bad.  Someone will pay the cost then and it will probably not be on the watch of those who promoted the initial plans. Or, even if it is on their watch, it will be said that some unforeseen circumstances changed and – after all – the Regents approved the project!  (Those at UCLA with long enough memories will recall the sad fate of the Westchester faculty housing project.)

It is inevitable that campus-level bureaucratic momentum will keep producing new projects and expansions.  Jobs and empires depend on such growth.  It is inevitable that every campus will want to include a full array of every professional program.  Absent an independent capacity for Regental evaluation before and after the fact, the current micro-level, case-by-case approach will not allow the Regents to exercise due diligence at a systemwide macro-level.
As for the hotel specifically, since the Regents created no auditing capacity to look at its results once it goes into operation, it will surely show a profit on paper regardless of its actual outcome.  Because the hotel is blended into a larger system, manipulation of costs charged to its operation and diversion of conferences and other activities from other existing facilities on campus can always create an ostensible surplus for the hotel with losses shifted elsewhere.  The Regents have no capacity for monitoring such cost shifting after the fact and did not chose to set such a mechanism up, whether for the hotel or for any other case-by-case project approval or proposed expansion that comes before them.

In a preemptive move, UCLA got the Luskins to sign a letter saying no alternative to the current hotel plan was acceptable, thus effectively closing off any options, as the chair of the Regents’ Grounds and Buildings committee pointed out.  But even if the subsequent campus politics of the hotel made its approval inevitable, the Regents could have used the occasion to create a true mechanism for due diligence after the fact.

The Moral: Even a white elephant can be made to fly, absent ongoing and after-the-fact oversight: