The UCLA Hotel Did Not Happen That Way 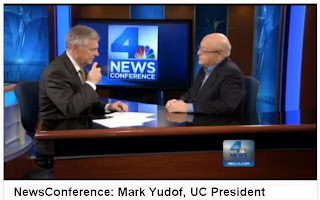 In a TV interview dated 7/13/12, UC President Mark Yudof talked about donations to UC.  He agrees with the interviewer, Conan Nolan of KNBC, that it is hard to explain to the public why in budgetary hard times, buildings are going up on campuses.  But he offers various explanations, none of which justify the proposed UCLA hotel/conference center.

One explanation is that the projects have been in the pipeline 5-10 years and the bonds have already been floated.  That is not true for the proposed UCLA hotel/conference center.  Bonds have not been floated.  And although the planning timeline is fuzzy due to contradictory statements from UCLA authorities, no one has suggested the project has been in the works for 5-10 years.

Another explanation offered is that the construction projects underway on UC campuses are dorms and parking garages that pay for themselves.  That is not true of the hotel/conference center which – even with the overoptimistic business plan – has to be subsidized by both a donation and various costs shifted to parking and other sources.

Most significantly, Yudof says that when donors absolutely insist on having a particular building constructed, UC reluctantly will go along.  The hotel/conference center was not something the donors came to UCLA and insisted on.  UCLA has never even made that claim.  The fact is that the project was proposed by UCLA to the donors and not the reverse.  The fact is that the hotel does not fit any of the Yudof explanations.

You can listen to the audio at the link below.  The statement about reluctantly accommodating donors who insist on a part building occurs just after one minute into the audio.
Posted by California Policy Issues at 7:38 AM