Who’s in Charge? Lessons from the Penn State Scandal for UCLA and Its Hotel Proposal 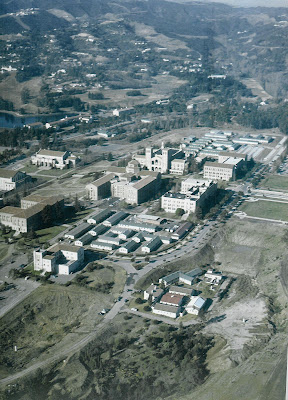 The news has been full of the Penn State University scandal in which a serial child abuser was protected by high university officials until suddenly the matter became public.  A report by a former FBI director was commissioned and put the blame on all involved in running the university including the trustees (equivalents of the Regents) for not asking questions and not doing the right thing.  Much ink was devoted to the scandal at Penn State in the LA Times and other newspapers.  But the most compelling analysis came on July 12 from the Times sports columnist Bill Plaschke.  Here is an excerpt from his column:

Fittingly, the most chilling part of Louis J. Freeh's lengthy condemnation of Penn State University and its legendary football coach Joe Paterno involves two men more fearful of a football program than a child molester. According to the 267-page internal report released Thursday, in the fall of 2000, two janitors spotted former longtime Penn State assistant coach Jerry Sandusky behaving inappropriately with a young boy in the campus showers. The men said they didn't to go to police because they were afraid that Paterno would order them fired.

"Would have been like going against the president of the United States in my eyes," one janitor told investigators. "I know Paterno has so much power, if he wanted to get rid of someone, I would have been gone … football runs this university."

Football runs this university. That sad statement should echo as a warning through the halls of educational institutions everywhere in the wake of a report that illustrates how a football-run university lost its way for the sake of sporting glory…

American universities have long promoted high-profile sports as a way of maintaining alumni engagement and fundraising.  That is, the standard rationale is that sports programs are really supports for the true academic mission.  From time to time, at various universities, the sports program begins to become an end in itself, producing scandals, with the Penn State debacle undoubtedly the most extreme case.

Although the Penn State problem involved sports, there is a larger lesson to be learned from Plaschke’s observations.  It has to do with letting non-academic support units and enterprises in a university become drivers of policy to the point where administrators deviate from what obviously needs to be done.  UCLA’s problem isn’t sports.  But it does have a problem – symbolized and embodied by its current hotel/conference center proposal.  What is supposed to be a support program of construction is moving along the spectrum toward becoming a driver of policy and an end in itself.

Over the years, the university has built up a construction empire which had its place when the university was in its expansion mode, roughly the post-World War II period until the early 1990s.  The photo at the top is taken from the coffee table book history of UCLA, “UCLA: The First Century.”  It shows UCLA in the early 1950s.  By that time, UCLA had expanded from a small cluster of buildings around Royce Hall but its campus was still in large part empty land.  Beginning in the 1950s, during the chancellorships of Franklin Murphy and Charles Young, UCLA became more than the “southern branch” of UC and achieved world-class status as a major research university.  There was much construction in that era to fill in the empty space and a bureaucracy was needed to handle the construction and expansion function.  But the physical capital being added was in support of the more important human capital being added.  Construction did not run the university even though there was much construction activity.

Nowadays, however, much has changed.  The empty campus space is gone so construction is more difficult and costly.  Putting up a new structure generally means demolishing an older one.  Parking no longer occurs on empty fields, as it did in the 1950s.  UCLA’s new parking came first from building above-ground structures and increasingly from very costly underground parking facilities.  More significantly, with the end of the Cold War, California ceased growing at the super-fast rate that had characterized the military-fueled era from World War II to circa 1990.  As the chart from the UCLA Anderson Forecast below shows, a widening gap between the old Cold War trend and the new reality developed, which in turn has reflected itself in periodic and ongoing state budget crises and diminishing state support for UC. 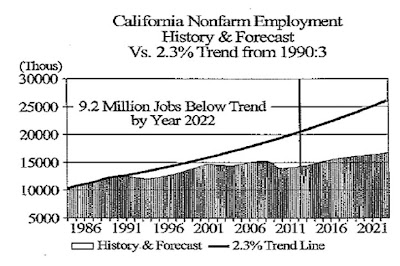 In short, the goal for UCLA can no longer be endless growth supported by endless construction.  Construction and enterprise operation have to be scaled back to fit the new reality.  Priority Number One has to be maintenance of existing excellence – something embodied in human capital at a university, not physical capital.  The construction/enterprise empire – developed as a support operation in an earlier era - cannot be allowed to run the university.

But are we moving on the spectrum of construction-as-support to construction as an end in itself?  Consider the facts about the hotel project that have appeared (frequently) on this blogsite:

*There is endless denial by the powers-that-be that a facility with 250 guest rooms – roughly the size of the W Hotel in Westwood – is actually a hotel.  Even when the Regents pointed out the self-evident truth that a 250-room facility is a hotel at their March meeting, at the campus level there was and still is complete denial.  Various alternative names have been used to describe the facility, all with the goal of not using the word “hotel.”

*The hotel cannot be profitable without filling its rooms.  Yet it can’t take commercial business due to tax law.  If it loses money, the costs will be spread in complicated and undoubtedly hidden ways to the campus.  The stage for spreading those losses has already been set by blending the hotel with other campus facilities, even including Lake Arrowhead.

*Costs in the current business plan already are being shifted to the campus via less-than-policy reimbursement to the parking service for the demolition of parking structure #6 and the charge elsewhere and to “reserves” for reconstructing the displaced bus terminal.

*The process of approval is being orchestrated with business plans being hidden until the last minute (when the Regents’ agenda rules force disclosure) and by planted praise at public hearings.

*The risk to the campus of a tax audit – encompassing not just the hotel but other existing campus enterprises – is being ignored despite explicit warnings from local commercial hotel owners and the local LA city council member.  Indeed, an audit could spread to other UC campuses once started.  If the UCLA hotel crosses the tax line and competes with commercial operators, they will have every incentive to alert the IRS and other tax authorities.  As has been pointed out, UCLA’s hospitality enterprise already solicits business for its various facilities in ways that invite tax scrutiny.

*Alternative approaches that would meet the donors’ objectives of facilitating academic conferences and the spread of university-based knowledge are being ignored because they would not require a structure as grandiose as the hotel design currently proposed or the one previously proposed.

Those within the campus hierarchy at UCLA are no more likely to express their concerns about the hotel than those Penn State janitors.  But at their March meeting, the Regents – who are not inside the hierarchy - were unwilling to get along by going along.  With more or less the same plan before them this week, it will be interesting to see where the Regents come out.  There is always a temptation to accept assurances and not create a disturbance.  After all, the campus-level authorities must know what they are doing.  Right?  But in the end, that approach did not work out so well for the Penn State trustees.
Posted by California Policy Issues at 7:59 AM