Official Description of Governor's Tax Initiative from the LAO 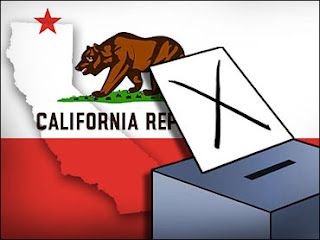 As readers of this blog will know, the Regents have endorsed Prop 30, the governor's tax initiative to be on the ballot Nov. 6, 2012.  Below is the official description from the Legislative Analyst's Office that will be seen by voters.

This measure temporarily increases the state sales tax rate for all taxpayers and the personal income tax (PIT) rates for upper-income taxpayers. These temporary tax increases provide additional revenues to pay for programs funded in the state budget. The state’s 2012-13 budget plan—approved by the Legislature and the Governor in June 2012—assumes passage of this measure. The budget, however, also includes a backup plan that requires spending reductions (known as “trigger cuts”) in the event that voters reject this measure. This measure also places into the State Constitution certain requirements related to the recent transfer of some state program responsibilities to local governments. Figure 1 summarizes the main provisions of this proposition, which are discussed in more detail below. 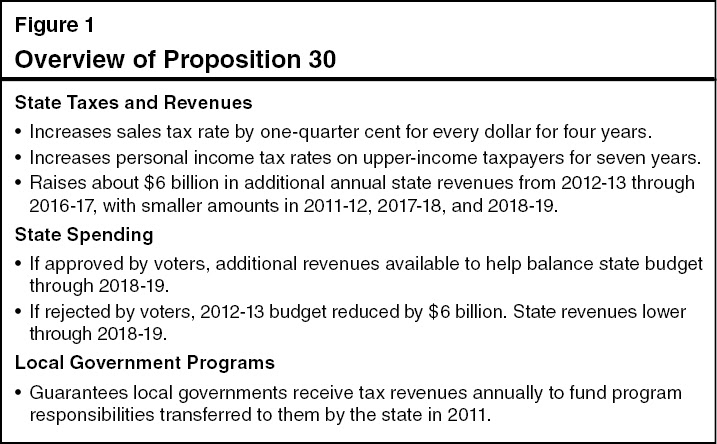 The General Fund is the state’s main operating account. In the 2010-11 fiscal year (which ran from July 1, 2010 to June 30, 2011), the General Fund’s total revenues were $93 billion. The General Fund’s three largest revenue sources are the PIT, the sales tax, and the corporate income tax.
Sales Tax. Sales tax rates in California differ by locality. Currently, the average sales tax rate is just over 8 percent. A portion of sales tax revenues goes to the state, while the rest is allocated to local governments. The state General Fund received $27 billion of sales tax revenues during the 2010-11 fiscal year.
Personal Income Tax. The PIT is a tax on wage, business, investment, and other income of individuals and families. State PIT rates range from 1 percent to 9.3 percent on the portions of a taxpayer’s income in each of several income brackets. (These are referred to as marginal tax rates.) Higher marginal tax rates are charged as income increases. The tax revenue generated from this tax—totaling $49.4 billion during the 2010-11 fiscal year—is deposited into the state’s General Fund. In addition, an extra 1 percent tax applies to annual income over $1 million (with the associated revenue dedicated to mental health services). 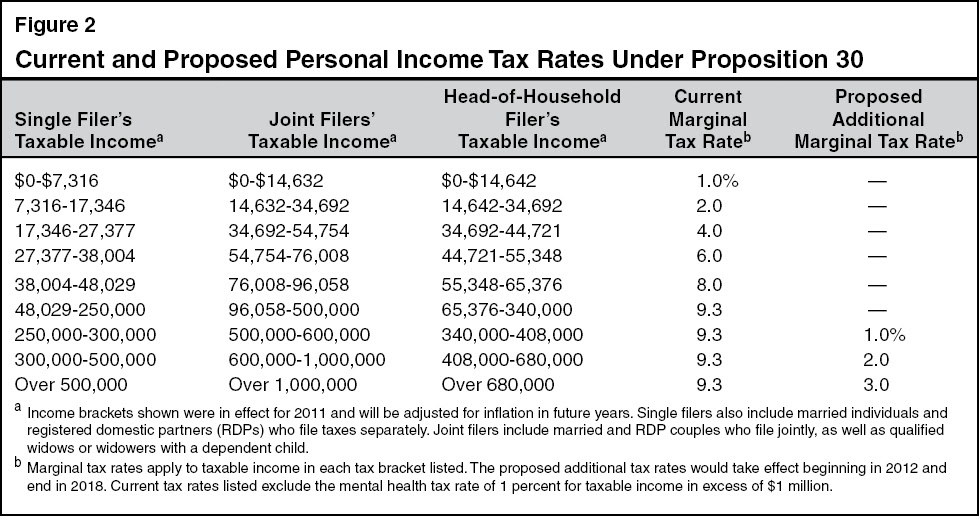 Additional State Revenues Through 2018-19. Over the five fiscal years in which both the sales tax and PIT increases would be in effect (2012-13 through 2016-17), the average annual state revenue gain resulting from this measure’s tax increases is estimated at around $6 billion. Smaller revenue increases are likely in 2011-12, 2017-18, and 2018-19 due to the phasing in and phasing out of the higher tax rates.
Revenues Could Change Significantly From Year to Year. The revenues raised by this measure could be subject to multibillion-dollar swings—either above or below the revenues projected above. This is because the vast majority of the additional revenue from this measure would come from the PIT rate increases on upper-income taxpayers. Most income reported by upper-income taxpayers is related in some way to their investments and businesses, rather than wages and salaries. While wages and salaries for upper-income taxpayers fluctuate to some extent, their investment income may change significantly from one year to the next depending upon the performance of the stock market, housing prices, and the economy. For example, the current mental health tax on income over $1 million generated about $730 million in 2009-10 but raised more than twice that amount in previous years. Due to these swings in the income of these taxpayers and the uncertainty of their responses to the rate increases, the revenues raised by this measure are difficult to estimate.

State General Fund Supports Many Public Programs. Revenues deposited into the General Fund support a variety of programs—including public schools, public universities, health programs, social services, and prisons. School spending is the largest part of the state budget. Earlier propositions passed by state voters require the state to provide a minimum annual amount—commonly called the Proposition 98 minimum guarantee—for schools (kindergarten through high school) and community colleges (together referred to as K-14 education). The minimum guarantee is funded through a combination of state General Fund and local property tax revenues. In many years, the calculation of the minimum guarantee is highly sensitive to changes in state General Fund revenues. In years when General Fund revenues grow by a large amount, the guarantee is likely to increase by a large amount. A large share of the state and local funding that is allocated to schools and community colleges is “unrestricted,” meaning that they may use the funds for any educational purpose.

New Tax Revenues Available to Fund Schools and Help Balance the Budget. The revenue generated by the measure’s temporary tax increases would be included in the calculations of the Proposition 98 minimum guarantee—raising the guarantee by billions of dollars each year. A portion of the new revenues therefore would be used to support higher school funding, with the remainder helping to balance the state budget. From an accounting perspective, the new revenues would be deposited into a newly created state account called the Education Protection Account (EPA). Of the funds in the account, 89 percent would be provided to schools and 11 percent to community colleges. Schools and community colleges could use these funds for any educational purpose. The funds would be distributed the same way as existing unrestricted per-student funding, except that no school district would receive less than $200 in EPA funds per student and no community college district would receive less than $100 in EPA funds per full-time student.

Fiscal Effect if Measure Is Approved

2012-13 Budget Plan Relies on Voter Approval of This Measure. The Legislature and the Governor adopted a budget plan in June to address a substantial projected budget deficit for the 2012-13 fiscal year as well as projected budget deficits in future years. The 2012-13 budget plan (1) assumes that voters approve this measure and (2) spends the resulting revenues on various state programs. A large share of the revenues generated by this measure is spent on schools and community colleges. This helps explain the large increase in funding for schools and community colleges in 2012-13—a $6.6 billion increase (14 percent) over 2011-12. Almost all of this increase is used to pay K-14 expenses from the previous year and reduce delays in some state
K-14 payments. Given the large projected budget deficit, the budget plan also includes actions to constrain spending in some health and social services programs, decrease state employee compensation, use one-time funds, and borrow from other state accounts.
Effect on Budgets Through 2018-19. This measure’s additional tax revenues would be available to help balance the state budget through 2018-19. The additional revenues from this measure provide several billion dollars annually through 2018-19 that would be available for a wide range of purposes—including funding existing state programs, ending K-14 education payment delays, and paying other state debts. Future actions of the Legislature and the Governor would determine the use of these funds. At the same time, due to swings in the income of upper-income taxpayers, potential state revenue fluctuations under this measure could complicate state budgeting in some years. After the proposed tax increases expire, the loss of the associated tax revenues could create additional budget pressure in subsequent years.

Fiscal Effect if Measure Is Rejected

Backup Budget Plan Reduces Spending if Voters Reject This Measure. If this measure fails, the state would not receive the additional revenues generated by the proposition’s tax increases. In this situation, the 2012-13 budget plan requires that its spending be reduced by $6 billion. These trigger cuts, as currently scheduled in state law, are shown in Figure 3. Almost all the reductions are to education programs—$5.4 billion to K-14 education and $500 million to public universities. Of the K-14 reductions, roughly $3 billion is a cut in unrestricted funding. Schools and community colleges could respond to this cut in various ways, including drawing down reserves, shortening the instructional year for schools, and reducing enrollment for community colleges. The remaining $2.4 billion reduction would increase the amount of late payments to schools and community colleges back to the 2011-12 level. This could affect the cash needs of schools and community colleges late in the fiscal year, potentially resulting in greater short-term borrowing. 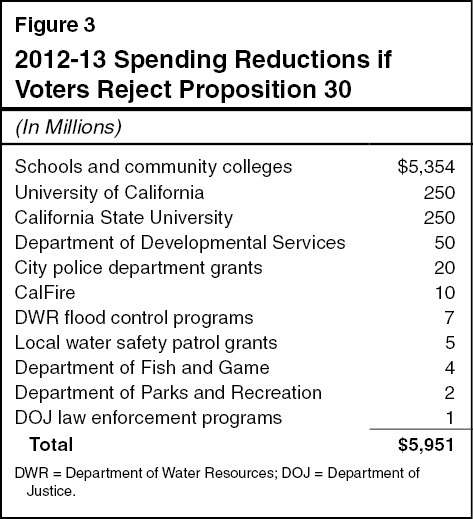 Effect on Budgets Through 2018-19. If this measure is rejected by voters, state revenues would be billions of dollars lower each year through 2018-19 than if the measure were approved. Future actions of the Legislature and the Governor would determine how to balance the state budget at this lower level of revenues. Future state budgets could be balanced through cuts to schools or other programs, new revenues, and one-time actions.

If voters approve this measure, the state sales tax rate would increase for four years and PIT rates would increase for seven years, generating an estimated $6 billion annually in additional state revenues, on average, between 2012-13 and 2016-17. (Smaller revenue increases are likely for the 2011-12, 2017-18, and 2018-19 fiscal years.) These revenues would be used to help fund the state’s 2012-13 budget plan and would be available to help balance the budget over the next seven years. The measure also would guarantee that local governments continue to annually receive the share of state tax revenues transferred in 2011 to pay for the shift of some state program responsibilities to local governments.
If voters reject this measure, state sales tax and PIT rates would not increase. Because funds from these tax increases would not be available to help fund the state’s 2012-13 budget plan, state spending in 2012-13 would be reduced by about $6 billion, with almost all the reductions related to education. In future years, state revenues would be billions of dollars lower than if the measure were approved.

UPDATE: More info on the proposition:

Birgeneau ($450,000) Breslauer ($306,000) like to blame the politicians, since they stopped giving them their entitled funding. The ‘charge instate students higher tuition’ skyrocketed fees by an average 14% per year from 2006 to 2011 academic years. If they had allowed fees to rise at the same rate of inflation over past 10 years they would still be in reach of middle income students. Breslauer Birgeneau increase disparities in higher education, defeat the promise of equality of opportunity, and create a less-educated work force.

UCB is to maximize access to the widest number of residence at a reasonable cost. Birgeneau Breslauer’s ‘charge Californians higher tuition’ denies middle income families the transformative value of Cal.