Something to keep in mind from our colleagues at UC-Irvine 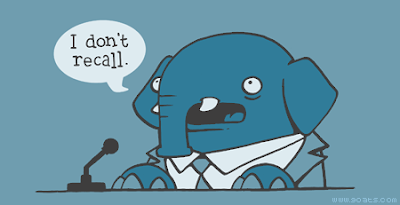 People who can easily recall every moment of their lives have different brains than others, a new study has claimed. University of California-Irvine scientists have found fascinating differences in the brains and mental processes of an extraordinary group of people who can effortlessly recall every moment of their lives since about age 10, the 'Science Daily' reported. The phenomenon of highly superior autobiographical memory first documented in 2006 by UCI neurobiologist James McGaugh and colleagues in a woman identified as "AJ" has been profiled on CBS's '60 Minutes' and in hundreds of other media outlets.

..The researchers have assessed more than 500 people who thought they might possess highly superior autobiographical memory and have confirmed 33 to date, including the 11 in the paper, according to the journal.  All had variations in nine structures of their brains compared to those of control subjects, including more robust white matter linking the middle and front parts.

…However, these people with exceptional autobiographical memory did not score well on the routine memory tests. Only when asked about public or private events that occurred after age 10, "they were remarkably better at recalling the details of their lives," said McGaugh, senior author on the study.

These folks couldn't be UC-Irvine grads, could they?

Email ThisBlogThis!Share to TwitterShare to FacebookShare to Pinterest
Labels: UC-Irvine

Greate pieces. Keep writing such kind of information on your blog.
Im really impressed by it.
Hey there, You have done a fantastic job.
I'll definitely digg it and for my part suggest to my friends. I'm confident they'll be benefited from this website.

Hello, I enjoy reading through your article. I like to write a little comment to support you.