A Guide for the Perplexed Voter 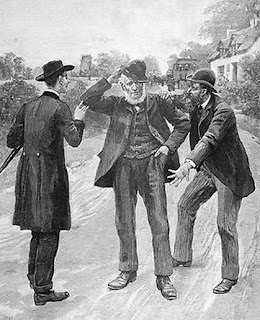 If you are wondering what statewide ballot propositions will be on the ballot in November, here is the complete list (below).  The numbering and ordering of the propositions has yet to occur.  The legislature passed a bill that would put the governor’s tax initiative as the first one.  That action is currently being litigated by Molly Munger, wealthy sponsor of a rival tax initiative.  The legislature removed a water bond from the November ballot that would otherwise have appeared.  In some cases below, yours truly has added some editorial comments in italics.  Text below is from the California Secretary of State’s website.  A link to the website can be found by scrolling to the end of the listing.

Sponsored by an insurance company:

Changes Law to Allow Auto Insurance Companies to Set Prices Based on a Driver's History of Insurance Coverage. Initiative Statute.
Summary Date: 08/11/11 | Qualified: 01/18/12 | Signatures Required: 504,760
Proponent: Mike D'Arelli (916) 283-9473
Changes current law to permit insurance companies to set prices based on whether the driver previously carried auto insurance with any insurance company. Allows insurance companies to give proportional discounts to drivers with some prior insurance coverage. Will allow insurance companies to increase cost of insurance to drivers who have not maintained continuous coverage. Treats drivers with lapse as continuously covered if lapse is due to military service or loss of employment, or if lapse is less than 90 days. Summary of estimate by Legislative Analyst and Director of Finance of fiscal impact on state and local government: Probably no significant fiscal effect on state insurance premium tax revenues. (11-0013.)

Death Penalty Repeal. Initiative Statute.
Summary Date: 10/20/11 | Qualified: 04/23/12 | Signatures Required: 504,760
Proponent: Jeanne Woodford c/o James C. Harrison (510) 346-6200
Repeals death penalty as maximum punishment for persons found guilty of murder and replaces it with life imprisonment without possibility of parole. Applies retroactively to persons already sentenced to death. Requires persons found guilty of murder to work while in prison, with their wages to be applied to any victim restitution fines or orders against them. Creates $100 million fund to be distributed to law enforcement agencies to help solve more homicide and rape cases. Summary of estimate by Legislative Analyst and Director of Finance of fiscal impact on state and local government: Net savings to the state and counties that could amount to the high tens of millions of dollars annually on a statewide basis due to the elimination of the death penalty. One-time state costs totaling $100 million from 2012-13 through 2015-16 to provide funding to local law enforcement agencies. (11-0035)

Human Trafficking. Penalties. Sex Offender Registration. Initiative Statute.
Summary Date: 12/23/11 | Qualified: 05/10/12 | Signatures Required: 504,760
Proponent: Daphne Phung c/o James C. Harrison and Kari Krogseng. (510) 346-6200
Increases criminal penalties for human trafficking, including prison sentences up to 15-years-to-life and fines up to $1,500,000. Fines collected to be used for victim services and law enforcement. Requires person convicted of trafficking to register as sex offender. Requires sex offenders to provide information regarding Internet access and identities they use in online activities. Prohibits evidence that victim engaged in sexual conduct from being used against victim in court proceedings. Requires human trafficking training for police officers. Summary of estimate by Legislative Analyst and Director of Finance of fiscal impact on state and local government: Potential one-time local government costs of up to a few million dollars on a statewide basis, and lesser additional costs incurred each year, due to the new mandatory training requirements for certain law enforcement officers. Minor increase to state and local governments on the costs of incarcerating and supervising human trafficking offenders. Unknown amount of additional revenue from new criminal fees, likely not to exceed the low millions of dollars annually, which would fund services for human trafficking victims. (11-0059)

Summary Date: 02/14/12 | Qualified: 06/11/12 | Signatures Required: 504,760
Proponent: James Wheaton (510) 444-4710 x309
Requires labeling on raw or processed food offered for sale to consumers if made from plants or animals with genetic material changed in specified ways. Prohibits labeling or advertising such food as “natural.” Exempts foods that are: certified organic; unintentionally produced with genetically engineered material; made from animals fed or injected with genetically engineered material but not genetically engineered themselves; processed with or containing only small amounts of genetically engineered ingredients; administered for treatment of medical conditions; sold for immediate consumption such as in a restaurant; or alcoholic beverages. Summary of estimate by Legislative Analyst and Director of Finance of fiscal impact on state and local government: Potential increase in state administrative costs of up to one million dollars annually to monitor compliance with the disclosure requirements specified in the measure. Unknown, but potentially significant, costs for the courts, the Attorney General, and district attorneys due to litigation resulting from possible violations to the provisions of this measure. (11-0099)

Governor’s tax initiative
Temporary Taxes to Fund Education. Guaranteed Local Public Safety Funding. Initiative Constitutional Amendment.
Summary Date: 03/16/12 | Qualified: 06/20/12 | Signatures Required: 807,615
Proponent: Thomas A. Willis c/o Karen Getman (510) 346-6200
Increases personal income tax on annual earnings over $250,000 for seven years. Increases sales and use tax by ¼ cent for four years. Allocates temporary tax revenues 89 percent to K-12 schools and 11 percent to community colleges. Bars use of funds for administrative costs, but provides local school governing boards discretion to decide, in open meetings and subject to annual audit, how funds are to be spent. Guarantees funding for public safety services realigned from state to local governments. Summary of estimate by Legislative Analyst and Director of Finance of fiscal impact on state and local government: Increased state revenues over the next seven fiscal years. Estimates of the revenue increases vary—from $6.8 billion to $9 billion for 2012-13 and from $5.4 billion to $7.6 billion, on average, in the following five fiscal years, with lesser amounts in 2018-19. These revenues would be available to (1) pay for the state's school and community college funding requirements, as increased by this measure, and (2) address the state's budgetary problem by paying for other spending commitments. Limitation on the state's ability to make changes to the programs and revenues shifted to local governments in 2011, resulting in a more stable fiscal situation for local governments.(12-0009)

“Munger” school tax initiative.  Direct rival to governor’s tax initiative.
Tax for Education and Early Childhood Programs. Initiative Statute.
Summary Date: 02/17/12 | Qualified: 06/20/12 | Signatures Required: 504,760
Proponents: Molly Munger, Roberta B. Johansen, James C. Harrison c/o Remcho, Johansen & Purcell, LLP (510) 346-6200
Increases personal income tax rates for annual earnings over $7,316 using sliding scale from .4% for lowest individual earners to 2.2% for individuals earning over $2.5 million, ending after twelve years. During first four years, 60% of revenues go to K-12 schools, 30% to repaying state debt, and 10% to early childhood programs. Thereafter, allocates 85% of revenues to K-12 schools, 15% to early childhood programs. Provides K-12 funds on school specific, per-pupil basis, subject to local control, audits, and public input. Prohibits state from directing or using new funds. Summary of estimate by Legislative Analyst and Director of Finance of fiscal impact on state and local government: Increased state personal income tax revenues beginning in 2013 and ending in 2024. Estimates of the revenue increases vary from $10 billion to $11 billion per fiscal year beginning in 2013-14, tending to increase over time. The 2012-13 revenue increase would be about half this amount. Until the end of 2016-17, 60 percent of revenues would be dedicated to K-12 education and 10 percent would be provided to early care and education programs. These allocations would supplement existing funding for these programs. In 2017-18 and subsequent years, 85 percent would be provided to K-12 education and 15 percent to early care and education. General Fund savings on debt-service costs of about $1.5 billion in 2012-13 and $3 billion in 2013-14, with savings tending to grow thereafter until the end of 2016-17. In 2015-16 and subsequent years with stronger growth in state personal income tax revenues, some of the revenues raised by this measure—several hundred million dollars per year— would be used for debt-service costs, resulting in state savings. (11-0100)

Generally described as closing a corporate tax loophole.  Not a direct rival to governor’s tax initiative but some pundits believe having three tax initiatives on the ballot is confusing and might cause voters to reject all of them.
Tax Treatment for Multistate Businesses. Clean Energy and Energy Efficiency Funding. Initiative Statute.
Summary Date: 01/12/12 | Qualified: 06/20/12 | Signatures Required: 504,760
Proponent: Joseph Caves
Requires multistate businesses to calculate their California income tax liability based on the percentage of their sales in California. Repeals existing law giving multistate businesses an option to choose a tax liability formula that provides favorable tax treatment for businesses with property and payroll outside California. Dedicates $550 million annually for five years from anticipated increase in revenue for the purpose of funding projects that create energy efficiency and clean energy jobs in California. Summary of estimate by Legislative Analyst and Director of Finance of fiscal impact on state and local government: Approximately $500 million in additional state General Fund revenues in 2012-13 and $1 billion each year thereafter from requiring a single sales factor formula for corporate taxes, with about half of the additional annual revenues from 2013-14 through 2017-18 supporting energy efficiency and alternative energy projects. Increased Proposition 98 minimum funding guarantee for K-14 schools of roughly $225 million annually from 2012-13 through 2017-18 and by roughly $500 million each year thereafter, as a result of additional state General Fund revenues. (11-0080)

Pushed by a “good government” group.  Be skeptical. Wait for the pro and con debate to unfold.
State Budget. State and Local Government. Initiative Constitutional Amendment and Statute.
Summary Date: 12/29/11 | Qualified: 06/26/12 | Signatures Required: 807,615
Proponent: Sunne Wright McPeak c/o Robin B. Johansen and James C. Harrison (510) 346-6200
Establishes two-year state budget cycle. Prohibits Legislature from creating expenditures of more than $25 million unless offsetting revenues or spending cuts are identified. Permits Governor to cut budget unilaterally during declared fiscal emergencies if Legislature fails to act. Requires performance reviews of all state programs. Requires performance goals in state and local budgets. Requires publication of all bills at least three days prior to legislative vote. Gives counties power to alter state statutes or regulations related to spending unless Legislature or state agency vetoes changes within 60 days. Summary of estimate by Legislative Analyst and Director of Finance of fiscal impact on state and local government: Decreased state revenues and commensurate increased local revenues, probably in the range of about $200 million annually, beginning in 2013-14. Potential decreased state program costs or increased state revenues resulting from changes in the fiscal authority of the Legislature and Governor. Increased state and local costs of tens of millions of dollars annually to implement new budgeting practices. Over time, these costs would moderate and potentially be offset by savings from improved program efficiencies. (11-0068)

Republicans pushed for years to take redistricting out of the hands of the legislature.  When it finally happened, they didn’t like the results but only filed this anti-redistricting initiative to undo new districts for the state senate (leaving out assembly and congressional new districts).
Redistricting. State Senate Districts. Referendum.
Summary Date: 08/26/11 | Qualified: 02/24/12 | Signatures Required: 504,760
Proponent: Julie Vandermost c/o Charles H. Bell, Jr. (916) 442-7757
State Senate districts are revised every ten years following the federal census. This year, the voter-approved California Citizens Redistricting Commission revised the boundaries of the 40 Senate districts. This referendum petition, if signed by the required number of registered voters and filed with the Secretary of State, will: (1) Place the revised State Senate boundaries on the ballot and prevent them from taking effect unless approved by the voters at the next statewide election; and (2) Require court-appointed officials to set interim boundaries for use in the next statewide election. (11-0028)
The full listing with links to the actual initiative language is at http://www.sos.ca.gov/elections/ballot-measures/qualified-ballot-measures.htm  Or maybe you have an information overload already:
Posted by California Policy Issues at 8:33 AM