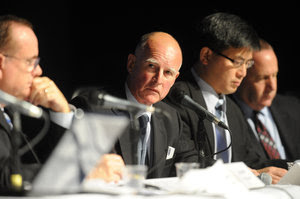 Gov.-elect Jerry Brown released details this afternoon of his budget forum in Los Angeles next Tuesday.

The meeting with education leaders follows a summit with lawmakers and local officials in Sacramento yesterday.

Brown's office described the event in an advisory as a meeting to "discuss the state's fiscal challenges in K-12 and higher education." It will be at UCLA.

Like yesterday's forum in Sacramento, the event is invitation-only. Brown's transition office plans to stream the meeting online.

"It's really a continuation of the discussion that the governor-elect initiated yesterday," spokesman Evan Westrup said.

Some advance advice from budgetary experts:

Posted by UCLA Faculty Association at 8:20 AM