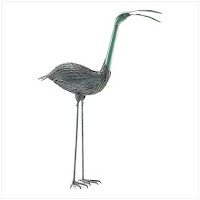 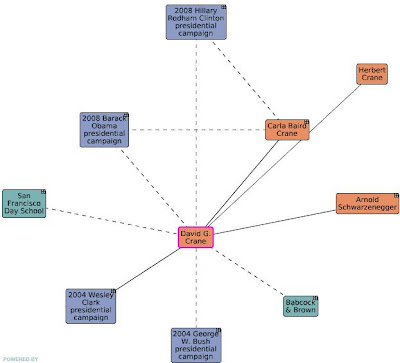 In a very lame-duck action, Governor Schwarzenegger has nominated David Crane, generally billed as his economic advisor, to the UC Board of Regents. As you can see above, he is an odd mix of Democrat and Republican. Below is an excerpt from one news account:

Gov. Arnold Schwarzenegger named one of his top economic advisers Thursday to the governing board of the University of California, which has been rocked in recent years by California's budget crisis. David Crane, 57, was named to fill the UC regents seat vacated by Joanne Kozberg. Crane, who will not receive a salary, must be confirmed by the Senate for a term to expire in March 2022.

Crane, a Democrat, has served as special adviser to the Republican governor on jobs and economic growth since 2004. He also has been a board member of the California High-Speed Rail Authority and the Commission on Economic Development. "David's contributions during his time in my administration have shown his commitment to doing everything he can to make California great," Schwarzenegger said in a written statement. "Serving as a member of the Board of Regents, I know that David will devote the energy, tenacity and creativity needed to keep the University of California the finest public university system in the world," the governor added.

Democrats in the legislature may balk at approving this appointment and probably would prefer to have Jerry Brown nominate someone. However, I Googled around about Crane and found that when he was nominated to the CalSTRS board, the following statements came up. I don't know if they derailed his nomination - someone could check - but they are worth keeping in mind given current pension concerns at the Regents:


"Crane openly endorsed the governor's defined contribution pension proposal in 2005, beaming that he 'just loved' Schwarzenegger's 2005 state of the state address. At the San Francisco luncheon he said, 'All the governor proposed would be a limitation to some of these special privileges held by government employees, so I fully support the governor's agenda.'"

The quotes are from:

UPDATE: The Sacramento Bee today carries an account of this nomination which explicitly notes the current controversy (described in prior posts on this blog) about lifting the pension ceiling at UC for highly-paid individuals. See http://www.sacbee.com/2010/12/31/3290139/schwarzenegger-appoints-pension.html

In short, Crane would likely be a voice on the Regents for defined-contribution pensions at UC, if some ballot initiative mandating such pension systems were to appear on the ballot. An initiative of that type - as numerous previous posts on this blog have pointed out - could override the Regents' December decision to retain the defined-benefit format.

On the other hand, Crane as a Regent might be a voice for ramping up contributions to the existing UC pension. In a press release from the governor's office, he criticized a decision by CalPERS to put off a contribution hike. Since Schwarzenegger-era press releases may disappear from the web, I have reproduced it below:

“Today’s vote was the wrong thing to do. While the additional $600 million would have put more pressure on this year’s state budget, today’s decision will only compound that pressure on future state budgets and take even more money from education, parks, health and public safety programs.

“By not contributing today, next year’s budget will have to make up for both that $600 million and what that $600 million was expected to have earned in CalPERS’s hands. Since CalPERS expects to earn 7.75 percent net on its assets that means that, instead of costing the state $600 million this year, the state will incur a cost of $650 million next year. That’s $50 million more that otherwise could go to education, parks, health or public safety. This is why deferring needed pension contributions is the equivalent of borrowing money at a very high rate.

“Just as with CalPERS’s decision to ‘smooth’ investment losses over 33 years and thereby boost and pass costs to the next generation, this is another example of why our pension system requires reform, including the establishment of an independent board that represents the interests of the taxpayers and of the programs that actually bear the burden of rising pension costs.”

However, worrying about cranes - and whether they will fly - is probably not worth doing. Happy New Year!