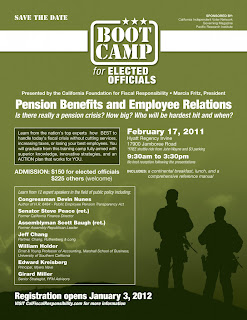 As prior posts have noted, there has been an active campaign - with varying intensity - behind a ballot initiative that would affect all public pensions (including UC's) in California. Although the Regents have now enacted a plan for UC, their decisions could be overridden by such an initiative. The image accompanying this entry indicates that the issue continues to simmer.

Whether the proponents of such an initiative have the $1-$2 million needed in practice to gather signatures to get it on the ballot, or the considerable amount that would be needed for a campaign thereafter, remains unknown.

When Meg Whitman was running for governor, she put the kabash on such an effort for the November 2010 ballot, not wanting to engender opposition. (Nonetheless, she ran on a program of imposing DC plans for new hires except police.) There is no such obstacle to putting something on the ballot now.
Posted by California Policy Issues at 7:37 AM