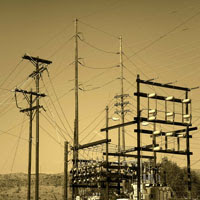 Wikipedia defines a “brownout” as follows

A brownout… is a drop in voltage in an electrical power supply. The term brownout comes from the dimming experienced by lighting when the voltage sags.

Wikipedia then goes on to describe the impact of a brownout on various devices. Here are some of those impacts:

* The heat output of any resistance device, such as an electric space heater will vary with the true power consumption, which is proportional to the square of the applied voltage. Therefore a significant loss of heat output will occur with a relatively small reduction in voltage. Similarly, an incandescent lamp will dim due to the lower heat emission from the filament. Generally speaking, no damage will occur but functionality will be impaired.

* Commutated electric motors, such as universal motors, whose mechanical power output also varies with the square of the applied voltage, will run at reduced speed and reduced torque. Depending on the motor design, no harm may occur. However, under load, the motor will draw more current due to the reduced back-EMF developed at the lower armature speed. Unless the motor has ample cooling capacity, it may eventually overheat and burn out.

* An induction motor will draw more current to compensate for the decreased voltage, which may lead to overheating and burnout.

* An unregulated direct current linear power supply (consisting of a transformer, rectifier and output filtering) will produce a lower output voltage for electronic circuits, with more ripple, resulting in slower oscillation and frequency rates. In a CRT television, this can be seen as the screen image shrinking in size and becoming dim and fuzzy. The device will also attempt to draw more current in compensation, potentially resulting in overheating.

Now you can read the article below and decide which impact is most analogous to what UC will experience in the coming budget Brownout. Note that it is customary for governors to leak out bits and pieces of their budget plans in advance of the formal unveiling. The story below is part of that process.

Jerry Brown plays hardball on state budget: His plan will confront both parties, with calls for tax extensions and deep program cuts. (excerpts)

Gov.-elect Jerry Brown is laying the groundwork for a budget plan that would couple deep cuts to state services, including university systems and welfare programs, with a request that voters extend temporary tax hikes on vehicles, income and sales that are set to expire next year. The blueprint Brown will unveil when he takes office early next month also is expected to take aim at several tax breaks and subsidies that have been fiercely guarded by the business lobby in Sacramento, according to people involved in budget discussions with the incoming administration.

…The combination of austere spending and extended tax hikes is designed to confront both parties and their allied interest groups with painful choices that Brown says are necessary to truly resolve the state's massive budget problems. He intends to take swift action, using the political capital of a new governor to confront a deficit that could easily subsume his governorship.

…Brown, who pledged not to raise taxes without voters' signoff, would face a daunting mid-March deadline to get his proposals onto a special-election ballot. He has said publicly he wants lawmakers to approve a budget within about 60 days. The process usually drags on seven or eight months.

…His strategy is risky. Voters already overwhelmingly rejected extending the temporary vehicle, sales, and income taxes in May 2009, months after lawmakers and Gov. Arnold Schwarzenegger enacted them. But political strategists say private polls show that voters are far more willing to extend existing taxes than to levy new ones. The current temporary tax hikes are all due to end by July 1.

…Those taxes included raising the income tax rate by 0.25%, slashing the dependent credit by more than two-thirds, nearly doubling motorists' annual vehicle license fee to 1.15% of a car's value and hiking the state sales tax by 1%. Placing the tax extensions on the ballot could prove difficult. Although Democrats form a majority of a Legislature often beset by partisan gridlock, at least some Republican support would be needed for the required two-thirds vote.

…Details of which programs Brown will propose to cut remain unclear. But in private discussions, he has mentioned paring back the state's welfare program, reducing what doctors and healthcare providers are paid to care for the poor, and trimming funding for the University of California and California State University systems. Public university students have had to cope in recent years with soaring tuition, furloughed faculty and reduced class offerings…

OK, Jerry. Give us the Bad News:


UPDATE: A similar story followed a day later in the Sacramento Bee. In this one, a key Republican expresses skepticism about getting GOP votes for the 2/3 necessary to put a proposition on the ballot. See http://www.sacbee.com/2010/12/30/3288273/brown-plans-to-take-tax-hike-to.html
Posted by California Policy Issues at 7:35 AM