UCLA History: Eric Monkkonen of the History and Public Policy Depts. was an expert on murder 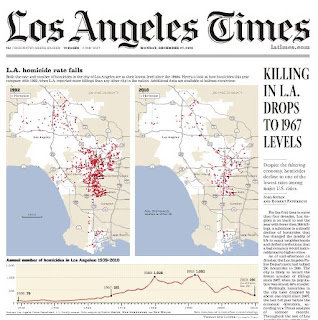 You may have seen the LA Times article last Sunday on the murder rate in Los Angeles and its surprising decline. Had he survived, there would have undoubtedly been long quotes and observations in the article from former History and Public Policy Professor Eric Monkkonen, UCLA's expert on murder - and the history thereof.

Of course, as you go back in time, data on murder rates were not routinely collected. Prof. Monkkonen, among other techniques, hired undergrads to go through old newspapers, pulling out references to murders in various cities.

The LA Times article looks at various explanations by experts as to why the rate has declined. I distinctly remember a talk by Monkkonen in which he indicated that it may well be that we simply don't understand why social phenomena such as murder come and go in waves. The LA Times article is at http://www.latimes.com/news/local/la-me-la-crime-20101217,0,1871598.story

Prof. Monkkonen's obit is below:

Professor Eric Monkkonen, Distinguished Professor of History and Public Policy, died May 30, 2005 after a long battle with cancer. Eric grew up in Duluth, Minnesota, earned his undergraduate (English), master’s (American Studies) and Ph.D. (History) degrees all from the University of Minnesota. During his career he conducted influential research on urban finance, local governments, police, crime and violence.

He authored and edited several books and published more than 50 research articles. His book titles include, America Becomes Urban: The Development of U.S. Cities and Towns, 1780-1980, which colleagues describe as the definitive history of urbanization in the United States. His later work focused on the history of local public finance and on urban crime, culminating in another major book, Murder in New York City, is based on a statistical time series back through the early nineteenth century. The book examines some of the major social shifts considered to affect homicide. These include the effects of immigration, urban growth, the Civil War, changes in weapons, demographic changes, and Prohibition. His work with nineteenth century coroner’s inquests allows ethnographic reconstruction of fatal violence, showing how gender roles and weapons shaped fatal individual conflicts. Further, by comparing New York City to London and Liverpool, he sets the current receding wave of violence in an international context. His recent work focused on violence in Los Angeles, while a major posthumous essay, “Homicide: Explaining America’s Exceptionalism,” was featured in a forum in the February 2006 volume of The American Historical Review.

Eric, who began his academic career at UCLA in 1976, was recognized not only for his historical research but also for his methodological contributions. He received grants and fellowships from organizations including the National Science Foundation, the National Institute of Justice, the National Endowment for the Humanities, and the Social Science Research Council.

Colleagues described Monkkonen not only as an outstanding scholar, but as a dedicated teacher. “Eric loved UCLA and actively contributed to its life. Not only was he an active citizen of the university, he was a dedicated and personable colleague and teacher,” said Sanford Jacoby, professor of management, history, and public policy.

In addition to his scholarly pursuits, Professor Monkkonen was involved in several organizations. He formerly served as president of the Urban History Association, Social Science History Association, and was a member of the National Consortium for Violence Research. He is survived by his wife, Judy, and sons Pentti and Paavo.

The Eric Monkkonen Fund for the Support of U.S. History has been established. Contributions may be sent to Edward A. Alpers, UCLA Department of History, Los Angeles, CA 90095-1437, (Please make checks payable to UCLA Foundation - Monkkonen Fund.)