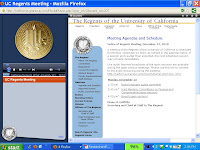 Below are links to the audio of the Regents meeting of 12-13-10. There are 13 segments. (A couple of minutes of noise at the beginning of Part 1 have been omitted during which there were problems in linking two locations. The meeting officially began once the link was established.)

At this meeting, the Regents approved the UCOF (University Committee on the Future) report as well as the Yudof plan for post-employment benefits (pension & retiree health care). The Regents meeting took place with a video link to UCLA where some Regents attended.

As the previous post on this blog noted, the Yudof plan document was recently modified to omit certain limits on higher-level pensions. Other than an acknowledgment that there was a modification, there was no discussion of the reasons for the change or what the change entailed.

The public comment period ran about three quarters of an hour which appeared to be less time than the agenda indicated. There were comments on both the UCOF and retirement issues. Union representatives argued for representation in controlling the pension, against a two-tier pension approach, against raising the retirement age to 65 for workers doing physical labor, and for a progressive schedule of recipient payments for retiree health. (Higher income recipients would pay more.) Also in the public comment segment was an appeal for aid for undocumented students.

A CUCFA representative began a discourse on an economic history of California since the end of World War II which was cut off because of time limits imposed on those who speak during the public comment period. It is not clear what the conclusion to be drawn was.

Following the public comment period, there was some discussion of both UCOF and retirement issues. Then the meeting turned specifically to the UCOF report. There was some confusion among the Regents as to whether approving the report would amount to approving the contingencies for funding listed in the report. (The report listed some more drastic/controversial contingent steps UC might have to take if the state funding crisis continued but did not make formal recommendations.) Two Regents voted against the UCOF report which nonetheless passed. Because there was a yes-or-no vote on the entire report, a Regent who objected to any element had to vote no on the whole package.

On the Yudof plan for retirement benefits, three Regents ultimately voted no: Bonnie Reiss, Eddie Island, and Charlene Zettel. Only Reiss gave a detailed explanation – basically that the lower-tier pension plan was still too generous and out of step with what public pensions of the future will offer. Reiss speaks at the beginning of Part 13.

There was no option included in the plan as approved for incumbent employees to switch to the lower-tier. As prior postings have noted, although there has been discussion of offering such a choice, IRS approval would be needed.

On the retirement age issue, there were several assertions that UC expected the age issue to come up in future collective bargaining negotiations.

Annoying element: Peter Taylor characterized the two-decade contribution holiday as one in which employees did not contribute. In fact, there were no contributions, employee or employer. Had there been contributions, the bulk would have been from the employer.