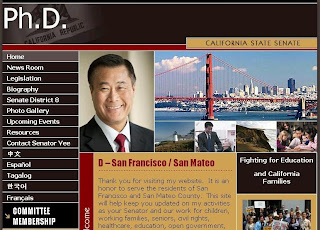 The latest from State Senator Leland Yee, the only state senator who puts Ph.D. at the top of his official webpage.

It ended up twice vetoed. But it was a bill that gained traction after students demanded to know how much Sarah Palin was paid to speak at a California State University campus fundraiser this year.

Today Sen. Leland Yee, D-San Francisco, announced that when the state Senate reconvenes Monday he plans to re-introduce a bill that would force more disclosure of information from private foundations linked to public higher education.

He said he believes Gov.-elect Jerry Brown, "unlike his predecessor," will "match his action with his rhetoric and sign this bill into law."...

Note: Yee is a newly-announced candidate for Mayor of San Francisco.

Why are you misrepresenting Senator Yee's website, even going so far as to make up a fake screenshot? His website doesn't say "Ph.D." It says "Senator Leland Yee, Ph.D." which is how his name is listed in the Senate roster just like Ed Hernandez, OD in the Assembly. And we thank Senator Yee for leading the charge for much-needed transparency at UC.

what a sad,small,insensitive post
to people of faith
to people of color
just really offensive on many levels
race, religion, color
especially in this season
(and it seems a tinge of misogyny toward a black woman thrown in for good measure)

Yee earned his PhD - in fact the SCOTUS are considering a case related to Yee, Child Psychology and violent video games right now, so- that PhD-- it come in handy-- for some anyway.

And a doctored screen shot is just sketchy- don't you want to maintain credibility?-- some dolt with a PhD likely did that too.
So much for the focus on PhD...

also, Yee has launched an exploratory on running for mayor - not yet announced his candidacy - but we doubt the author is concerned with a small thing called facts-- which is too bad since this is supposed to be a blog run by faculty (YIKES!)...that's disappointing- too bad for the Bruins.

wasn't it Yudof himself who said we should not believe in "faith-based budgets"-- why, yes, it was...
what's good for the goose surely should be good for the gander- Fiat Lux -on the books, on everything.

California Policy Issues:
whether it is as of 7am or whatever:
normal users notify the webmaster (usually listed on the bottom of pages if you are new to the internet)-- they are the ones responsibly for making sure web pages display properly. It is likely a coding problem.
The disingenuous snark statement of "the only state senator who puts Ph.D. at the top of his official webpage." still was not necessary -- along with all the rest of the low social i.q. content of the post.

As the person responsible for Senator Yee's page, it never just said "Ph.D." in the headline. I have looked at the coding for the past several years and the only change in headline has been from "Senator Leland Y. Yee, Ph.D." to "Senator Leland Yee, Ph.D." In terms of the bill, fortunately most faculty members and organizations support the legislation as well as several student groups, tax organizations, open government advocates, newspapers, et al.

Now that you are calling me a liar - and somehow falsifying what in fact appeared on the webpage on Saturday and then Sunday when you raised the point - I am done with this dialog. Believe your eyes. What you see is what there was on Saturday and Sunday. No tricks. I simply went to the website, saw what you see with PhD in the left-hand upper corner, hit printScreen, save the image, and put it on the screen. WYSIWYG. If you are managing Yee's webpage, please do not blame me for your errors.

This is a great bill and very necessary at UC and CSU.