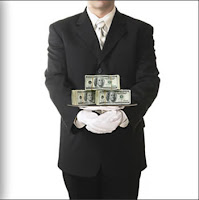 Dec. 3, 2010, Dale Kasler, Sacramento Bee
CalPERS was among the big winners in an obscure Federal Reserve loan program aimed at rescuing the nation's troubled credit markets last year.
The state's other big pension fund, CalSTRS, also participated in the program, but to a much smaller degree, according to records released this week by the Federal Reserve. …(T)hey and other big investors took advantage of a $70 billion Federal Reserve loan program designed to pump money into the consumer and business lending markets.
CalPERS, in fact, was among the most enthusiastic participants. With $5.14 billion borrowed from the Fed, the California Public Employees' Retirement System invested in a portfolio of high-performing credit card loans. CalPERS put in $350 million of its own money and earned a $175 million profit, a return of around 50 percent, said Curtis Ishii, a senior investment officer at the pension fund. CalPERS has repaid the Fed loan.
…Banks and other lenders often bundle their loans into securities and sell them to investors, providing the banks with cash to make new loans. But that market all but dried up in 2009.
That's when the Fed stepped in with a program called TALF, or Term Asset-Backed Securities Loan Facility, which made low-interest loans to pension funds, hedge funds and other institutions willing to invest in these securities.
With money borrowed from the Fed, CalPERS and CalSTRS purchased securities backed by all manner of loans. CalPERS used its money to invest in credit card loans issued by Chase and Citibank.
CalSTRS, the California State Teachers' Retirement System, borrowed $225 million from the Fed and invested in commercial mortgages and student loans. "I'm told the return was very good," said CalSTRS spokesman Ricardo Duran…
Full article at http://www.sacbee.com/2010/12/03/3229529/state-pension-funds-reaped-rewards.html#mi_rss--E-Business
=========
Note: The list of entities that took advantage of this Fed program can be found at:
http://www.federalreserve.gov/newsevents/reform_talf.htm
Click on the Excel sheet available on that page. If you use the “find” option in Excel, you can locate the CalPERS and CalSTRS loans by searching under “Calif”. There are multiple transactions involving these two pension funds. I could not find any that involved UCRS. Whether UCRS was eligible and - if it was - why it chose not to participate, I do not know.
Seems like CalPERS & CalSTRS got some friendly help:
Posted by UCLA Faculty Association at 6:58 AM