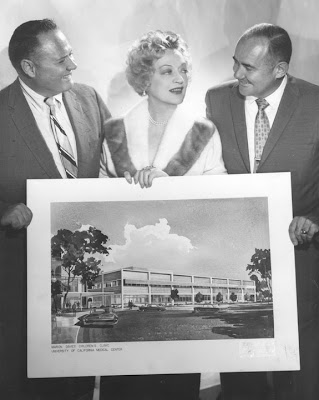 Marion Davies, for whom new Marion Davies Children's Clinic at UCLA Medical Center is to be named, examines architect's sketch of new facility with Congressman Joe Holt (R-22nd Dist.), left, and UCLA Vice Chancellor William G. Young. Clinic, to be under construction by spring, was made possible by Miss Davies' gift of $1,900,000 to Medical Center. (From LA Public Library photo collection.)

Davies - William Randolph Hearst's mistress - was not the bimbo depicted in the film "Citizen Kane." A contemporary photo is below:

And here is Davies in what was probably her first "talkie" in 1929:

I am a docent at the beach house of Marion Davies and am trying to strengthen the link to UCLA. I am a retired Biochemist from UCLA and so am interested in what is known.
Audree Fowler
afowler@mednet.ucla.edu