More Focus on the Outside Political Scene Needed When We Review Retirement Options? 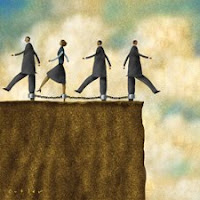 Uncomfortable Question: Are we too focused on internal UC politics in evaluating the various pension and retiree health care proposals? Is it a form of UC GroupThink? That issue was raised in a conversation with an administration official. We have tended to worry about what President Yudof thinks, what the Regents think, what various UC officials think, what Academic Senate leaders think, what UC unions think, etc. But in fact we could come up with a plan that somehow balances all these views but fails a public sniff test.

Below is a straw in the wind from the San Diego Union-Tribune concerning a ballot proposition in San Diego:

Of all the conditions attached to a proposed sales tax increase in San Diego, none could provide as much — or as little — savings as making changes to the lifetime health-care coverage provided to retired city workers. Under Proposition D on the Nov. 2 ballot, city leaders must lower the cost of that benefit — one of 10 conditions that must be met before the city can implement the Proposition D sales-tax increase...

This item serves as a reminder that ballot propositions dealing with pensions and other benefits in the entire public sector in California are a distinct possibility. Meg Whitman, for example, is pushing for defined contribution plans as the second tier pension - an option which is not being considered at UC. In the final gubernatorial debate, she stated that the UC pension was driving out students. (See earlier post.)

Governor Schwarzenegger was asked via his Twitter account what he thought of Whitman's willingness to allow defined benefit to continue for police - in exchange for support from police unions. Here is the exchange:

“@jashsf: @Schwarzenegger what do you think about eMeg selling her vote to the police union?”

Ballot propositions could override any Regental decision. There is always a danger of UC GroupThink.