Schwarzenegger on Pensions: An Unusual Address Which May Help UC 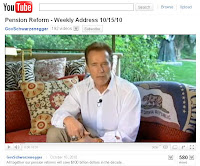 Governor Schwarzenegger's weekly radio address of 10/15/10, which is also posted on YouTube, slammed various Republicans by name for voting against the bill in the legislature that was needed to approve the deals he has cut with SEIU and other unions and was part of the budget agreement. (See earlier post.) In the YouTube version, he not only names errant Republicans but puts pictures of them on the screen.

Below is the text of the address. A link to the YouTube version is also below. However, note that whatever the Regents come up with in December as the UC version of pension reform, it will in general follow the format the governor is promoting, i.e., increased employee contributions (already passed by the Regents) plus a two-tier plan. Moreover, the UC plan has never had the abusive spiking features that some other public plans have had.

The danger for UC is that we get swept into some statewide agenda - possibly via a ballot proposition - when the new governor takes office. If we can be blessed as having our own plan that meets the standards, that will help us avoid that danger . (Of course, it is not a guarantee.)