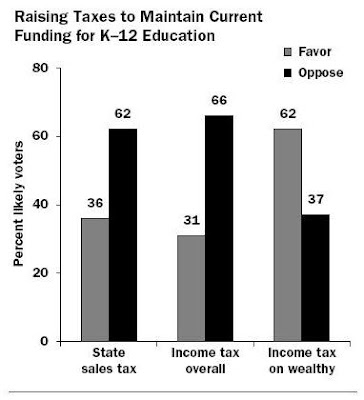 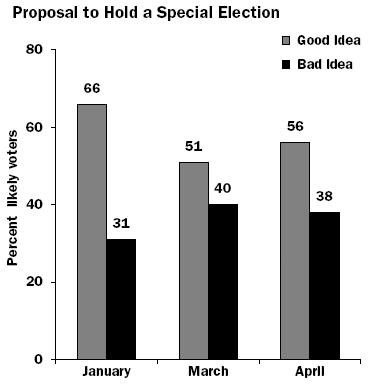 Here are two charts from the latest PPIC poll. The poll dealt mainly with issues of K-12 education and finance. However, Californians have long had a warm spot for K-12 and so framing budgetary issues as linked to K-12 (which they are, of course) probably makes voters more likely to support taxes than otherwise.

There remains majority support for calling a special election as proposed by the governor. However, such an election can no longer be called before the end of the fiscal year (before June 30). So that means what were to be billed as tax extensions become tax increases since the temporary tax increases enacted in February 2009 expire on June 30.

As the chart shows, support for increases in two of the taxes involved - sales and income - drops below the majority level unless it is only taxes on the wealthy. It is unlikely that Republican votes in the legislature could be found for wealthy-only taxes.

You can find the full PPIC poll at http://www.ppic.org/content/pubs/survey/S_411MBS.pdf.

There are reports that there is pressure on the governor somehow to get the legislature to pass tax extensions by the California Teachers Assn., among others. Exactly how he is supposed to get the needed 2/3 vote to do so is unclear.

It has been proposed in the past that there might be a legally-uncertain way of passing tax extensions by a simple majority in the legislature. But apart from violating the governor's campaign pledge to raise taxes only by a vote of the electorate, using an untested strategy which is likely to be tied up in the courts does not seem a particularly inviting strategy.

Yours truly cannot make sense of the proposal that the legislature should pass the tax extensions somehow. But here is the reference: http://blogs.sacbee.com/capitolalertlatest/2011/04/california-teachers-association-tax-election.html.

It appears that there was a song about the proposal: