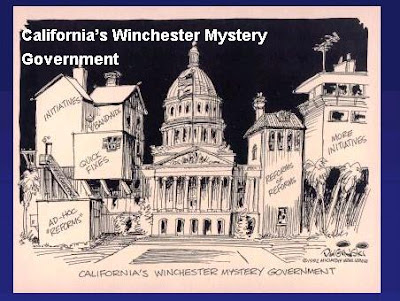 The event below coming up on Tuesday may be of interest to those concerned with the California budget crisis and general Sacramento dysfunction:

California—few regions in the world have caught the popular imagination of so many. From the glitz of Hollywood to the energy and innovation of Silicon Valley, from the weather to the wine, California is envied around the globe. Yet despite the state’s immense advantages, its finances are in deep trouble. For the past few years California has been in a budget and governance crisis, reaching its nadir in 2009 when the state no longer paid its bills in cash but issued IOUs instead. It has been declared a “failed state,” “dysfunctional,” and “ungovernable.” The good news is that California’s problems, though complex, are now well understood, so reform has become possible.

This event, a companion to a special report in the April 23, 2011 issue of The Economist brings together report author Andreas Kluth, and a team of California experts to discuss how the state got into its current fiscal mess—and also how, by introducing the right reforms, it can get out of it again.

Speakers will address the following questions:

ANDREAS KLUTH has been writing for The Economist since 1997. He is currently the US West Coast Correspondent, covering politics, society and economy in California and the western states. Before this, he covered technology from Silicon Valley, Asian business from Hong Kong, and finance from London.

Robert Hertzberg • Co-chair, California Forward, a nonpartisan, nonprofit organization working to bring government closer to the people and move the state in the right direction; former Speaker of the California State Assembly

This program is free and open to the public. Registration does not guarantee seating; stand by lines admitted for available seating within five minutes of start time.

PS: For those not familiar with the Winchester Mystery House to which the cartoon on the upper right alludes, check it out on the web http://www.winchestermysteryhouse.com/
Posted by California Policy Issues at 8:08 AM