Are We About to Burst With Pride? 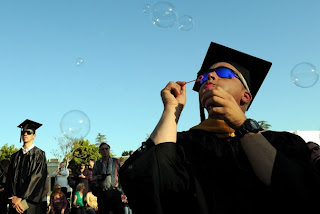 Dean Judy Olian of the Anderson School circulated links to two articles (really three when you follow the links) on the thesis that the next bubble is higher ed. A sample:

..Like the housing bubble, the education bubble is about security and insurance against the future. Both whisper a seductive promise into the ears of worried Americans: Do this and you will be safe. The excesses of both were always excused by a core national belief that no matter what happens in the world, these were the best investments you could make. Housing prices would always go up, and you will always make more money if you are college educated.

Like any good bubble, this belief – while rooted in truth – gets pushed to unhealthy levels…

By the way, the namesake of the Anderson School just gave the School another $25 million. So he apparently thinks higher ed, at least business higher ed, is worthwhile. See http://www.dailynews.com/news/ci_17924279