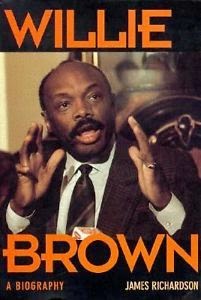 As blog readers will know, the Regents effectively chose not to divest from fossil fuel at their last meeting.  As part of the divestment call, however, there have been frequent references to South African divestment in the 1980s.  You might be interested in the account below on how that divestment came about, from James Richardson's intriguing biography of Willie Brown, former speaker of the California state assembly.  If it's any reassurance, the account agrees with the recollections of yours truly.  Keep in mind in reading the account that both Willie Brown and then-governor George Deukmejian were ex officio regents.  Also keep in mind the need of Gov. Deukmejian to maintain reasonable relations with Willie Brown in order to enact legislation:  (from pp. 311-312)

The partnership with George Deukmejian yielded one enormous, personally gratifying payoff for Willie Brown: after years of opposition, Deukmejian agreed to support withdrawing Californias $11.4 million pension fund portfolio from investments in companies conducting business in racially divided South Africa.  Getting Deukmejian to that position took Deukmejian's entire first term, and ranked as one of Brown's chief accomplishments as Assembly Speaker.

After the veto, the battleground over investments in South Africa switched to the University of California, which had $2.4 billion of its $6.4 billion portfolio invested in companies with ties to South Africa.  The stodgy Board of Regents, led by UC President David Gardner, was reluctant to withdraw the investments, fearful it would endanger the university's financial health.  The board and Gardner came under intense pressure from legislators and protesters.  Then Willie Brown entered the fray.  When the university's imperious president came to testify at a May 1985 legislative hearing, he was interrogated by the Assembly Speaker for nearly and hour.

"Now, Dr. Gardner," Brown began, "we are very concerned with the university's attitude.  Specifically, I want one scintilla of evidence that the atrocities of the South African regime present a problem to you personally, not as president of the University, but as a human being."

Gardner replied that, as a Mormon, he was familiar with discrimination.  He told how his grandfather was driven to Utah by religious bigots.  But Gardner maintained that the university could not take moral stands.

"I abhor oppression," said Gardner, "but I don't choose to advertise it."  Brown found the answer unsatisfactory.

"You can end discrimination against you by changing your religion.  Blacks in South Africa cannot," Brown shot back. "Willie Brown cannot change his skin as he could his religion.  There are no Utahs for Bishop Tutu."

Brown also went to work convincing Deukmejian that it was morally imperative for California to keep its money from supporting apartheid.  Brown appealed to Deukmejian's Armenian heritage and the oppression suffered by his relatives at the hands of the Turks.  Brown used one more argument: it was good politics.  The city of Los Angeles had enacted a South African investment boycott ordinance, and Mayor Bradley was preparing to bludgeon Deukmejian with it in their 1986 rematch.  Brown told Deukmejian that he did not have to take the chance.

Finally Deukmejian became a convert.  He began throwing his weight behind the push to pull the University of California's investments out of South Africa.  The governor even offered to lobby Congress and President Reagan who had vetoed a boycott bill.  The showdown came at a Regents meeting at UC Santa Cruz in July 1986.  Faced with a united front from Deukmejian and Brown, the board voted to become the first major institutional investor in California to join the South African boycott...

==
You can draw what lessons you like from this account.  But it does appear that the action of the Board of Regents in 1986 was not some sudden regental conversion to the cause; rather it was the product of a political deal between two ex officio regents who were taking a position the other regents could not decline to endorse.  It might be noted, because of some recent demands for anti-Israel divestment and academic boycott, that the 1986 regents/Willie Brown-George Deukmejian action was confined to investments and did not seek to impose an academic boycott of South Africans, South African academics, or South African universities.  At the time, you had South African researchers such as Dr. Christiaan Barnard, a pioneer in heart transplants, whose work medical academics couldn't easily ignore.  Poking around the UCLA library catalog, I find journals from South Africa from that era.  Indeed, in Sept. 1986, the library - shortly after the financial boycott decision - began a subscription to the South African Journal of Economic History.  Yours truly can recall South African visitors to UCLA in the apartheid period who arrived after the financial action.  I doubt the regents - even if asked by Brown and Deukmejian (which never happened) - would have gone along with an academic boycott.
Posted by California Policy Issues at 4:25 PM