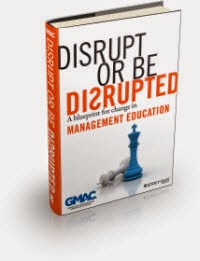 The word "disrupt" has become the rage in management circles, the notion being that new technologies come along and upset established industries and firms.  (That is not a new idea, by the way!)  Anyway, books are written, articles appear, etc.  The book pictured here was written by a former adjunct at Anderson, for example.

Here is a sampling of a recent article:


In a quarter of a century, most business students will never enter a classroom. The faculty lectures, the MBA student discussions and the homework assignments will occur instead over the Internet, where each part of the educational experience can be played as many times as it takes to fully absorb or satisfy, as if it were a Seinfeld rerun. The world's most famous professors will more likely be compelling teachers—rather than journal-published researchers—and many of them will be free agents, unattached to a single university. Technology will allow for free-agent faculty, able to teach directly to students, with the university being what it will increasingly be viewed as: just another middleman taking a profit. Professors won't need an affiliation with a university, because technology will allow them to create their own brands. The costs of academic learning will plummet. And much of education will be modular in nature. Students will pick and choose from the best professors and the best colleges and universities worldwide to construct a degree of choice. There will be little need to go to one school for several years and sit in classrooms with other students. The greatest asset universities now hold—the ability to grant a degree—will have so greatly diminished in value that it will become little more than a quant notion for the learned...

It wouldn't take much rewriting to substitute other degrees for the MBA in the above piece.  It's not clear from the article what happens to the research function of universities in this scenario.  But the bigger problem with futurology is that it is, well, futurology.  Remember the movie "2001" in which folks were routinely traveling to the moon on Pan Am vehicles and computers were so intelligent they could be intentionally evil?