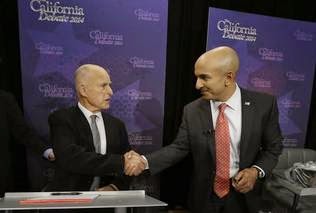 Last night's gubernatorial debate didn't really produce any surprises and only touched briefly on higher education.  Neel Kashkari complained about what he viewed as perverse incentives that arise from paying UC and CSU on a per-student basis.  Brown might have pointed out that he has essentially been putting lump sums in the budgets for the two systems that are not linked by formula to enrollment.  But he didn't.  Kashkari also pointed to the issue of out-of-state students.  Brown made a point of his 3-year tuition freeze.  At the end, he mentioned online education.

You can hear the higher ed portion of the debate at the link below.  The whole debate hour is available at http://www.calchannel.com/2014-gubernatorial-debate/.