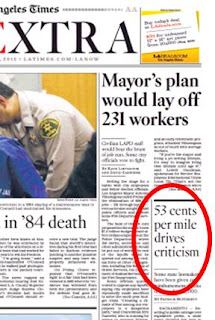 You may have noticed the article in today’s LA Times that is circled in the accompanying picture.  There is a long background story involved, but essentially a commission that sets legislators’ salaries cut their pay during the current state budget crisis and eliminated the practice of providing them with a state-owned car.  The car elimination step was supposed to save money but at the state reimbursement rate of 53 cents per mile for use of a private car, apparently the savings have not materialized.

The current university reimbursement is 55.5 cents per mile for use of a personal car on university business.  That UC rate, as I understand it, comes from the IRS – not UC – and is that federal agency’s estimate of an appropriate mileage business expense.  It includes both the price of gasoline and an estimate of wear on the car.

What seems to be at issue in the LA Times article is whether the mileage claimed by legislators is legit, i.e., whether they are claiming reimbursement for non-official travel.  But there could be spillover to UC if the issue becomes the rate per mile since the state rate is below the UC rate.  Someone just reading the headline or the headline’s subtitle could easily think there is a scandal in 53 cents: “A citizens' panel was thwarted when it tried to set a $300 limit on state lawmakers' monthly car allowances. Now, with a rate of 53 cents a mile, some have gotten reimbursements of more than $2,000.”

Bottom line: No scandal at UC.  Let’s hope that we don’t get erroneously criticized.