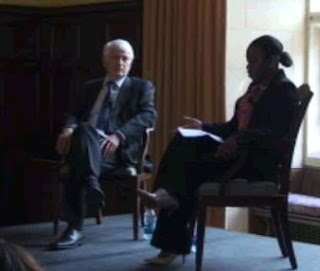 Chancellor Block, Vice Chancellor Steve Olson, and Assistant Vice Chancellor for Campus Human Resources Lubbe Levin participated in a staff Town Hall on April 4. The session was videoed but the video works poorly and the commercial service utilized includes ads.  Below is a link to the audio of the session which works much better. There were no exhibits at the session so nothing is lost in the audio-only format.

There were specific questions, some in-person/some submitted in advance, on the proposed hotel/conference center, the upcoming (systemwide) campus climate survey, pensions, and donor-community relations.  Links just to those questions are also available below.  They are video/audios, i.e., a video with a still picture.

The hotel question came up after the embarrassing refusal of the Regents to ratify the project at their recent meeting.  The chancellor seemed to imply that if you just called the project a conference center rather than a hotel, all would be well.  However, the number of rooms in the project is comparable to the local Westwood area hotels so more than a wording change needs to be considered.  You can hear his response at the link below:
On campus climate, the chancellor expressed concerns about the extreme length of the survey which could discourage participation:
On pensions, the chancellor noted that incumbent employees are not affected by the two-tier modification of the pension plan but also noted that state ballot propositions might affect the plan:

The question on donor-community relations came from an anonymous employee involved in fundraising.  The question may have been a veiled reference to frictions regarding the proposed sale of the Japanese Garden and the hotel issue.  The chancellor, however, made no direct reference to those issues and it is not clear that he picked up the inference.  It is notable that a fundraising employee raised the question. Link to the response below:
The full audio (about 50 minutes) can be heard at the link below: