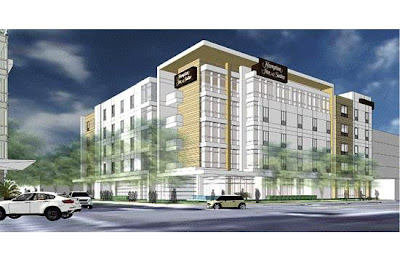 We continue to report on the UCLA hotel/conference center project which the Regents found questionable in their March meeting and refused to endorse.  Earlier, we noted three hotel projects being planned for Santa Monica.  It is useful to look at a rendering of one of them which has 138 rooms and would be at 5th Street and Colorado.

It’s pretty massive and useful to look at.  Now consider that the 250-room proposed UCLA hotel would have over 80% more rooms and you get a sense of the scale of the UCLA project.  The Santa Monica project shown above is described as follows:

…The Hampton Inn and Suites is a proposed 72-foot tall, six-story building with 138 guest rooms and, just like the Courtyard, 78,750 square feet of floor area with 80 to 100 subterranean parking spaces…

The original post on the three Santa Monica hotels is at:
http://uclafacultyassociation.blogspot.com/2012/04/more-westside-hotels-coming-along.html
No doubt about it.  What UCLA has proposed is BIG:

Update: Here is a picture of the somewhat smaller 131-room hotel planned to be across the street from the one above: 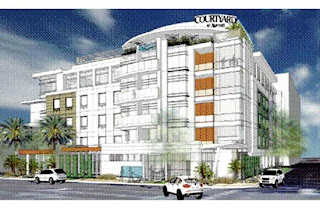 Photo from http://www.smmirror.com/#mode=single&view=34462 (same source as above).