Can't we all get along? 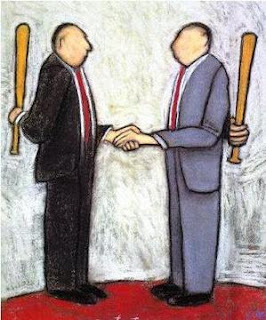 From today’s Inside Higher Ed (excerpt):

Critics of a proposal by the University of California Los Angeles to add a compulsory course on community and conflict to its general education requirements for the College of Letters and Science say that the idea say is akin to peddling old wine in a new bottle, and not much different from a diversity requirement that was voted down by faculty in 2004. Next month, faculty members are expected to vote on the measure, variations of which have been decades in the making. In 2004, faculty members rejected a proposal that would require a diversity course before graduation. Before that, in the mid-1990s, there had been talk of a similar requirement, but the Academic Senate at the time decided to encourage inclusion of multicultural studies into different courses, according to reports.  Faculty leaders and students who have worked on the current proposal say that it is broader and thus more acceptable to faculty members…Michael Meranze, chair of the Faculty Executive Committee, stressed in an e-mail that that the community and conflict requirement is not designed to be a diversity requirement. “The requirement is quite serious about the problem of community and conflict as it has emerged as a modern problem. Again, this emphasis on the modern forms does not place some sort of chronological limit on the possible topics for courses,” he said…

Full story at http://www.insidehighered.com/news/2012/04/30/ucla-wants-revamp-general-education-requirement
Posted by California Policy Issues at 4:12 AM