Not a lot of action today - continued

We noted yesterday that this is a quiet time at UCLA (which is closed until January 2). So here is an excerpt from calpensions.com, a website that tracks public pensions in the state, on the push to divest from fossil fuels. UC has (sort of) divested from coal - not because the regents or the legislature required it - but, if you like, informally.

...Gov. Brown joined (New York Gov. Andrew) Cuomo and Washington Gov. Jay Inslee last June in announcing the formation of a coalition of states that would uphold the 2015 Paris agreement on climate change, even though President Trump announced the U.S. would withdraw.

There has been no indication that Brown, a leading U.S. advocate of action on climate change, will use his State of the State address next month to announce, like Cuomo, a fossil-fuel divestment plan.

Brown was heckled during his speech at the United Nations climate change conference in Bonn last month by protestors who want Brown, like Cuomo, to ban hydraulic fracturing or “fracking” in oil and gas fields.

“Poisoned wastewater” protestors chanted, the Sacramento Bee reported. “Keep it in the ground.” As the heckling continued, Brown shot back: “Let’s put you in the ground so we can get on with the show here.”

Brown signed legislation in 2015 requiring the two largest state pension funds, CalPERS and CalSTRS, to divest coal holdings, whose value had plummeted before the election of President Trump. CalPERS coal investments were valued at $83 million two years ago... 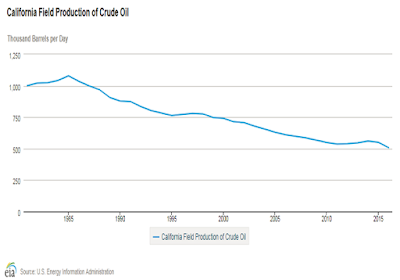 Note that while California is not a coal producer, it is ranks third among the states in oil production (behind North Dakota and Texas. California produces more oil than Alaska. That fact may suggest the reason why the state seems to be keener on coal divestment than oil. Moreover, oil production has been declining in recent years in California, which may explain the reluctance to ban fracking (or divest from fracked oil - if that is possible).
Posted by California Policy Issues at 7:53 AM