It could have been a contender 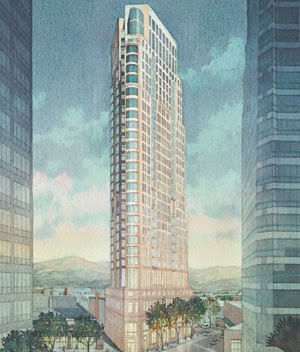 Blog readers will know that UCLA's Grand Hotel was said by the powers-that-be not to be a substitute for (compete with) other local commercial hotels.

Now comes word that the developer of the triangular property at Wilshire and Gayley who had originally planned to build a commercial hotel will now have his structure be entirely condos instead.  Sure sounds like the effect of competition with a campus hotel.


The new building at Wilshire and Gayley could have contended for Westwood-area hotel business but not with university and government subsidies to the UCLA Grand Hotel (free land; no taxes; cost shifting to campus if and when the business plan doesn't work out):