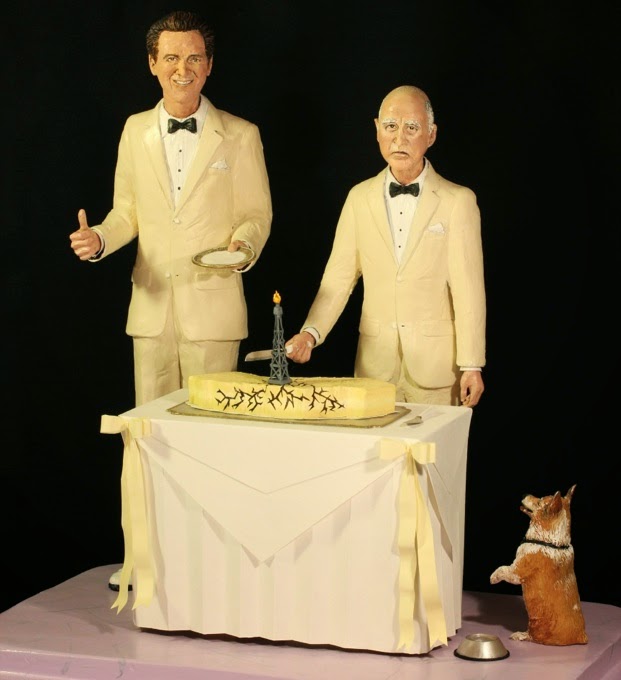 One more guess about what might come up in the public comments sessions of the upcoming Regents meetings: .  Prior posts have suggested that opposition to the new student regent nomination and, perhaps, the usual demands that the Regents fire President Napolitano might well come up.  To those topics, we might add fossil fuel divestment which is not on the official agenda while a committee studies the issue.

The Contra Costa Times runs an article about a sculpture attacking what the artist sees as the pro-fracking stances of Gov. Brown and Lt. Gov. Newsom (and maybe Brown's dog Sutter in the lower right hand corner).

An El Dorado Hills artist who has a sort of personal history with Gov. Jerry Brown has once again immortalized him in sculpture – this time, taking him to task for letting oil and gas “fracking” proceed in the Golden State.  Laura Harling’s “Happy Fracking Day” sculpture won an Award of Merit in fine art at the California State Fair, where it’s on display...

Harling... worked way back in the day as a state janitor tasked with cleaning a much younger Gov. Jerry Brown’s apartment...

Brown mumbled something about maybe divesting from coal (like Stanford).  You don't see a lot of coal mines in California.  You do see a lot of oil wells, however, a source of potential tax revenue when Prop 30 expires and, maybe, the economy suffers a slowdown or worse.  California is in fact a major oil producing state.  Here are the top 4 states' production in thousands of barrels per day in 2013:

But while California is a major producer, production in the state has fallen roughly in half since the mid-1980s.  That downward trend is likely not something the governor - an ex officio regent with his hand on the UC budget lever - would want to see exacerbated.  The lt. governor is also an ex officio regent with an eye on running to succeed Brown four years from now.  Both officials tend to stay away from public comment sessions (for obvious reasons).
Posted by California Policy Issues at 2:20 PM