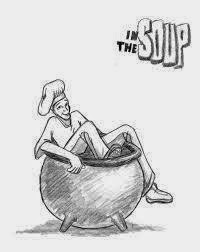 [See our previous posts on this matter.]

The University of California Student Association Systemwide Affairs Committee voted 10-0-2 in a closed session meeting on Thursday to recommend that the UC Board of Regents hold off on the confirmation of student regent-designate nominee Avi Oved until September...

The Daily Bruin’s Jeong Park spoke with Oved Friday about the email and recent allegations brought against Oved.

Daily Bruin: In the meeting Thursday, you said you wrote the email to Adam Milstein to thank him for his donation. Can you clarify the email?

Avi Oved: That letter was thanking Milstein for making a donation to Hillel. At the time, I had an internship at Hillel that gave me a lot of opportunities to establish myself as a leader and that was a stepping-stone for me to seek a different position. That was the point of the email.

DB: Why did the email mention supporting the Bruins United slate for the USAC election last year?

AO: Hillel supported (Bruins United), and Milstein was a huge supporter of Hillel. Given that my internship was leadership-based, I wanted to let him know I was pursuing a different position in the student government.

DB: Why did you not confirm the validity of the email in Tuesday’s statement?

AO: I didn’t find it to be quite relevant. (The) first and only accusation (addressed to me) was that I violated the USAC election code. There was no rule or protocol in terms of detailing where you got your funds from. The only rule that is detailed in the election code bylaws is informing the board (about the amount of money) you have and how much you have used. When people say I was not transparent throughout the process, the issue is that there is no mechanism to showcase that information. Even if I wanted to say where I got my funding from – which applies to no candidate at the USAC election – even if I wanted to share that with the public, there was no means to do so. There is no opportunity for you to say that I got money from X, Y and Z. It was outrageous to me to say that I violated or wasn’t transparent enough in the whole election code. Requiring me to be the only one to show the information goes against the whole transparency issue because there is a huge group of people who weren’t part of (a) transparent process. If USAC wants that information to be included in the future, so be it, but it is unfair (to say) that I was not transparent when there was no mechanism to (disclose the information)...

DB: Have you been talking with the UC or the regents at all since this started? If so, have they told you anything about your impending appointment?

AO: I plan on moving forward with the confirmation process. I am trying to lay the groundwork for the work I want to do. This issue, the Israel and Palestine conflict or divestment, is not really going to be the focus. There (are) more pressing issues for the UC. Some of (the) key issues I really want to push for (are) sexual violence prevention, increasing student representation on the Board of Regents and making sure we have a strong relationship with the California State University, California Community Colleges, etc. so we collectively advocate for higher education. Those issues are issues students care about. There is a need to look at the bigger picture. This issue of divestment was also (a concern) when (current student regent-designate Sadia Saifuddin) was appointed, but as you saw, the issue didn’t come up because the issue was not pertinent to the Board of Regents. I want to focus on the work I have (been) appointed to do...

Full story and interview at http://dailybruin.com/2014/07/04/qa-student-regent-designate-nominee-discusses-allegations-plans/