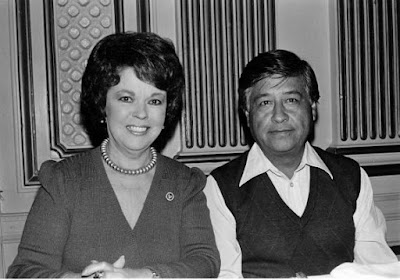 The odd couple: César Chávez and Shirley Temple Black at the Commonwealth Club in 1984

The odd story behind the odd-couple photo:

Shirley Temple Black got Cesar Chavez to deliver one of his most memorable speeches when she served as president of the Commonwealth Club of California in 1984. Mrs. Black invited Cesar to address one of the prestigious group’s regular luncheons in San Francisco. Cesar was hesitant at first because Mrs. Black was a well-known Republican and had served as President Nixon’s ambassador to Ghana.

So he asked me to follow up. I called the Commonwealth Club and received a phone call back from Mrs. Black. She said she was an admirer of Cesar and was enthusiastic about having him address the Commonwealth Club. So he accepted and spoke before a large crowd in the ballroom of a hotel in San Francisco’s Financial District on November 9, 1984. I worked with him on his remarks and accompanied him to the event.

Cesar and Mrs. Black had lunch together on the dais before the speech and got along like old friends. They shared common interests in gardening and vegetarianism. Mrs. Black related how she had been a member of the Screen Actors Guild as a child actor and maintained her membership in the union over the years so as to support other young actors. Much later when she had to undergo breast cancer surgery, Mrs. Black was surprised to discover the costs were covered because of her SAG membership.

What has become known as Cesar’s Commonwealth Club address was one of the few occasions when he was very introspective, placing himself and his movement in an historical context. It has been widely quoted, from speech anthologies to director Diego Luna’s upcoming major motion picture, Cesar Chavez, that releases in 100 markets across North America on March 28.