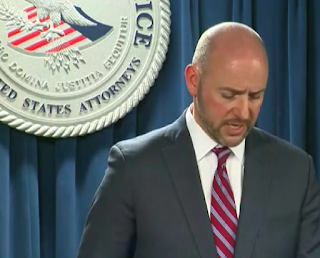 Here is more on the admissions scandal from a transcript of the indictment (excerpt):

In or about 2016, SINGER agreed with a Hillsborough, California couple who wanted their daughter to attend UCLA (the "Hillsborough Parents") to use bribes to facilitate their daughter's admission to the university as a purported soccer recruit.

On or about June 28, 2016, the UCLA Student-Athlete Admissions Committee approved the Hillsborough Parents' daughter ("UCLA Applicant 1") for "provisional student athlete admission," pursuant to which she would be admitted to the university on the condition that she met certain requirements, including that she successfully completed her senior year of high school and participated on the UCLA team as a student-athlete for a minimum of one full academic year.

On or about July 6,2016, the UCLA men's soccer coach emailed SINGER that the Hillsborough Parents' daughter had been provisionally admitted to the university as a student athlete.

On or about July 7,2016, SINGER directed a payment of $100,000 from one of the KWF charitable accoimts to a sports marketing company controlled by the UCLA men's soccer coach.

On or about July 8,2016, an employee of KWF emailed a $250,000 invoice to the mother of UCLA Applicant 1. The invoice stated: "Private Contribution - Letter of receipt will be provided upon payment."

On or about July 11, 2016, the father of UCLA Applicant 1 emailed SINGER asking him to confirm in writing that the $250,000 would be returned to them in the event his daughter did not receive final admission to UCLA.

On or about July 15, 2016, the Hillsborough Parents donated 2,150 shares of Facebook, Inc. stock to KWF as a purported charitable contribution. The stock transfer settled that same day.

On or about July 21,2016, a KWF employee sent the Hillsborough Parents a letter acknowledging a charitable contribution of $251,159. The letter stated: "Your generosity will allow us to move forward with our plans to provide educational and self-enrichment programs to disadvantaged youth." The letter falsely stated that "no goods or services were exchanged" for the donation.

In or about November 2017, the Hillsborough Parents filed personal tax returns that falsely reported total gifts to charity in 2016 of $1,061,890—a sum that included the purported contribution to KWF.

From transcript of indictment embedded in:
https://www.sacbee.com/news/local/article227457069.html
Posted by California Policy Issues at 12:35 PM