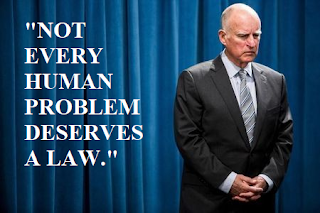 Jerry Brown famously said it on vetoing a bill by State Senator Leland Yee that would have fined parents for letting their kids ski without helmets.* Of course, Yee later had a very big problem with the law that landed him in prison. But that's another story. Google "Yee" and "Shrimp Boy" if you don't know the story.

In any case, the San Francisco Chronicle seems to have picked up Brown's theme in a recent editorial about the admissions scandal:

Editorial: The college admissions cheating scandal is horrible, but Sacramento doesn’t need to get involved

William “Rick” Singer leaves federal court in Boston on March 12 after being charged with racketeering conspiracy, money laundering conspiracy, conspiracy to defraud the United States and obstruction of justice in an alleged college admissions scam. As the scam net widens, the California Legislature is weighing new bills to combat admissions fraud.

The still-unfolding college admissions scandal, which exposed how a nonprofit educational foundation helped rich celebrities and powerful financiers bribe college coaches and exam proctors to secure places for their progeny at the some of the country’s most exclusive colleges and universities, is a shocking morality play about wealth, privilege and entitlement in America.

When the scheme was uncovered, it triggered a strong response. Alleged mastermind Rick Singer has pleaded guilty to serious federal charges, including racketeering conspiracy and money laundering. He faces up to 65 years in prison.

Singer’s cooperating with authorities, which means it’s far less likely that many of the parents who were charged in the scam — including celebrity actors Lori Loughlin and Felicity Huffman, along with wealthy Bay Area residents including vineyard owner Austine Huneeus and former private equity executive William McGlashan — will be able to get off scot-free.

The U.S. Department of Education has notified the eight universities named in the scandal — Stanford, Yale, Wake Forest, the University of San Diego, Georgetown, the University of Southern California, the University of Texas at Austin and UCLA — that it’s opened an investigation into their admissions practices for possible violations of federal financial aid laws.

So why does Sacramento feel the need to weigh in?

On Thursday, state lawmakers announced a new package of six bills in response to the disgusting admissions spectacle. While at least one of the bills in the package is well worth considering, the overall result is a fine example of Sacramento overreach.

The six proposals include AB697, which would bar universities that offer legacy admissions from receiving Cal Grants. AB1383 would require more approvals for candidates, often athletes, who are admitted “by exception.” An as-yet-untitled nonbinding resolution would recommend that the University of California and California State University systems phase out the SAT and ACT exams in admissions.

There’s also AB1342, which would require private admissions coaches to pay an annual registration fee with the state. AB136 would prevent those charged in the scandal from taking a tax deduction for their phony donations. The sixth proposal would direct the state auditor to look for potential fraud within California’s public university systems.

It’s hard to argue with AB136. There’s just no circumstance under which those accused of this crime should be allowed to use the alleged fraud amounts as a tax write-off.

===
Note from yours truly. It's already illegal to deduct a sham charitable donation that is used to benefit yourself.
===

But the other bills are misguided meddling.

California’s public universities can make their own decisions about admission requirements. How would a new state database have prevented this mess? As currently written, AB697 could backfire badly on lower-income students, who are the primary recipients of the Cal Grant program. Universities aren’t going to stop enrolling wealthy legacy students, so let’s not encourage them to reject low-income ones.

The lesson from the admissions scandal is that people with too much money and power will abuse their privileges unless checked.

But in this case, they were checked. The system is working.

There’s no need to pass legislation when accountability will provide the right outcome. Let this sordid tale work its way through the courts, Sacramento — not every new crime deserves a new law.

Source: https://www.sfchronicle.com/opinion/editorials/article/Editorial-The-college-admissions-cheating-13728349.php
===
*https://www.mercurynews.com/2011/09/08/jerry-browns-veto-messages-not-every-problem-deserves-a-law/
Posted by California Policy Issues at 8:56 AM