Is Davis the New Berkeley?

UC-Davis seems to be the center of conflict and controversy these days, reminiscent of UC-Berkeley in the 1960s. Most blog readers will recall the pepper-spray cop incident at Davis a few years back that got national attention - even the attention of Harry Shearer. (See link below.) The pepper spraying - which was linked to "Occupy" protests at that time - seemed to kick off a series of events. 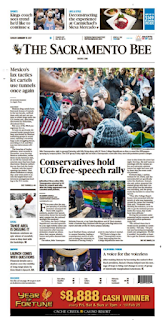 For example, there was last year's conflict between student groups and the Davis chancellor (who earlier had nearly lost her job over the pepper spray affair). This one ended with sit-ins in the chancellor's office and open warfare between the UC prez and the chancellor. The prez won that one.

We now have a new event. Breitbart editor Milo Yiannopoulos - who regularly visits college campuses and sparks protests - was supposed to speak at Davis last Friday. But the event was shut down due to counter demonstrations. He then came back the next day and held a campus rally anyway.

The interim chancellor at Davis reacted officially at:
https://www.ucdavis.edu/news/message-interim-chancellor-ralph-j-hexter-event-cancellation

Harry Shearer's musical account of the pepper spray incident is at:

PS: According to Yiannopoulos' website, he plans to be at UCLA on Feb. 2.

Yesd, re UC Davis....but! see the foto in LA Times today showing protestors holding a banner that reads, illiterally, Your FACISM is showing. True, the Italian dictator gave us the word and symbol for a corporate State, but our youth havent a glue to the last century, it seems....
Jascha Kessler