The Bruin and Urbanize Los Angeles* are reporting on a plan to build a 16-story apartment complex aimed at the student market next to the W Hotel in Westwood. It might be noted that the W Hotel building - if yours truly's memory is correct - was originally built as a private student housing complex, but apparently failed as a commercial venture. Up the street on Tiverton Avenue, what is now the Vintage Westwood Horizons senior facility was also originally a failed private student housing venture.

The site is at the corner of Le Conte and Hilgard, currently the home of a smaller 3-story building as shown below. 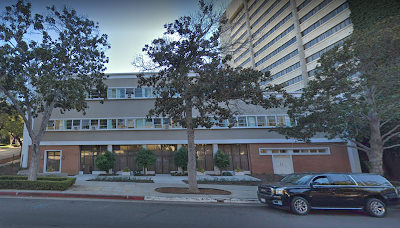 Two physicians are planning to build a new apartment complex for UCLA students in Westwood.
The plan for the new apartment complex, which would be built on Hilgard Avenue, was filed with the Los Angeles Department of City Planning on Nov. 19. The developers’ plan for the 16-story building, referred in the plan as The Agora, to have a total of 231 bedrooms spread over 64 residential units, varying in size from three-bedroom to five-bedroom plans in addition to some single- and double-bedroom units.
Eraj Basseri, a UCLA graduate and co-principal developer of The Agora, said the housing project was designed to address the lack of affordable student housing in Westwood.
“We are designing and programming The Agora to appeal to students, as there is a tremendous shortage of affordable student housing in Westwood,” Basseri said. “We expect students will seek out The Agora once it opens, so it is likely that only students will live there.”
Both Basseri and Ted Khalili, another co-principal developer of the project, said they introduced this project to help improve the living experience for college students in Westwood. They said they plan to provide open study spaces and communal lounges...
Susan Reuben, vice president of the Holmby Hills Homeowners Association, said the association likely will oppose the construction of The Agora because of its proximity to the Holmby Hills community. She said Holmby Hills residents pay high taxes for privacy and a peaceful lifestyle, and that she thinks the influx of students into The Agora would disrupt that environment...
Full story at http://dailybruin.com/2018/11/30/plans-for-the-agora-housing-development-filed-with-city-planning-department/
===
*https://urbanize.la/post/16-story-student-housing-community-proposed-near-ucla
Posted by California Policy Issues at 8:35 AM