Newsom at the Regents 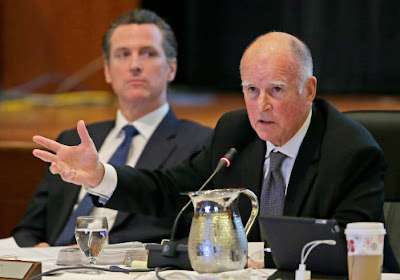 Both the governor and the lieutenant governor are ex officio members of the UC Board of Regents. Before Jerry Brown, however, governors rarely attended meetings of Board. Brown did attend and tended (of course) to overshadow Gavin Newsom as lieutenant governor when he did. But starting on January 7th, Newsom will move to Brown's seat, and will have a lot more to do with budgetary matters than he did in his former role.

Newsom has tended to vote against tuition increases and high salaries. Both positions were politically popular and, in the end, didn't matter since a majority of the Board usually approved them. Will he continue that approach as governor? No one knows. But here are a few comments by Newsom from past Regents meetings:

Back in 2012, when Prop 30 (Brown's proposed tax increase to deal with the budget crisis) was on the ballot, he criticized the governor for saying Prop 30 would prevent tuition increases:


He was skeptical about a UCOP presentation on supposed cost savings in 2015 and questioned omission of cost overruns on UCPath:


And he worried about a delayed pension payment in 2018:


Perhaps there are some clues in this record. But in the end, the prognosis is unclear.
Posted by California Policy Issues at 9:15 AM