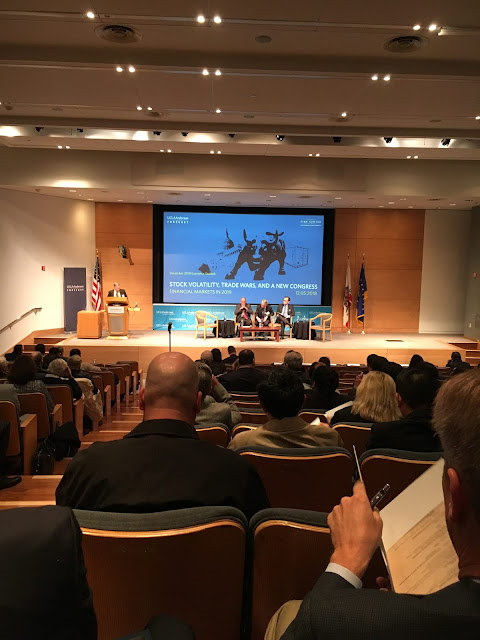 We like to show on a quarterly basis a photo from the UCLA Anderson Forecast just to remind folks that there are lots of auditoriums on campus for such events and that spending vast sums on a Grand Hotel was never a priority. The December Forecast took place yesterday in Korn Hall at the Anderson School. With that point made (once again), it's worth noting what the Forecast had to say.

Basically, at the national level, it has the economy slowing in a 3%, 2%, 1% pattern, i.e., national real GDP grows around 3% this year, 2% next year, and 1% the year after. Of course, it won't work out exactly like that. But slowing means that the risk of an actual downturn rises over time, as outgoing Governor Jerry Brown likes to point out. California would not escape the consequences, budgetary and otherwise, of such an outcome, nor would UC.

Already, Governor-Elect Newsom is signaling a scaling back of expectations:


California lawmakers had been in session for just 24 hours by midday Tuesday, and majority Democrats had already proposed tens of billions of dollars in new state spending. As Gov.-elect Gavin Newsom made the rounds at the Capitol, he had a message for them: No.

“All of this will be whittled down and we all will live within our means,” he told The Sacramento Bee as he left a meeting with Senate President Pro Tem Toni Atkins. “We’re not going to deviate from being fiscally prudent.”

A summary of the Forecast is at:
http://www.anderson.ucla.edu/lib/email/MARCOM/2018/PR-2018-forecast-dec.html

There was a lot of attention at the Forecast to the stock market and its recent "volatility." As such, you may have seen the headlines in the LA Times yesterday, particularly the one about a "wave of selling": 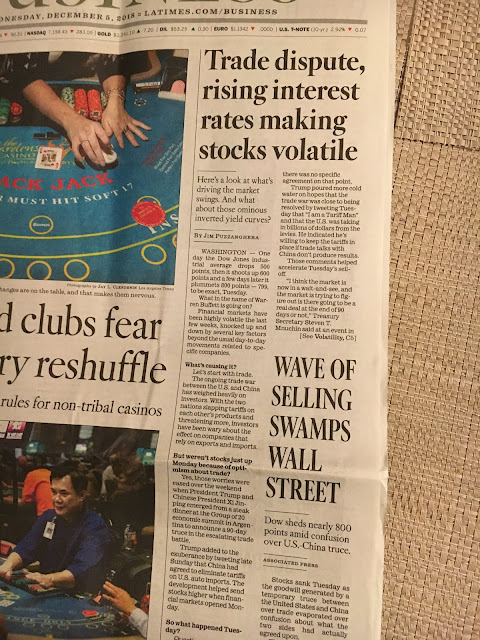 Yours truly cannot resist pointing out that every stock that is sold is a stock that is bought. (How do you sell without a buyer?) So the headline could just as well have been "Wave of BUYING Swamps Wall Street." Put another way, saying the market went down because everyone was selling carries no information. At best, the headline might have read "Market Consensus Stock Price Fell." Just saying...
Posted by California Policy Issues at 7:01 AM