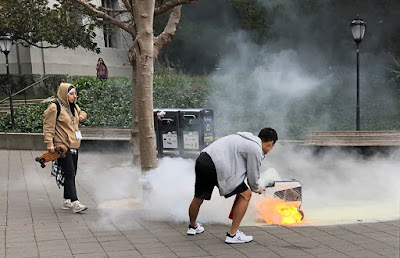 
Describing the robot as a “hero” and a “legend,” UC Berkeley students expressed their grief on Facebook as news of a fallen KiwiBot reached the campus community.
About 2 p.m. Friday, a KiwiBot — one of the more than 100 robots that deliver food throughout the campus and city — caught fire outside the Martin Luther King Jr. Student Union.
According to Sasha Iatsenia, head of product at Kiwi, the company is still working with UCPD to investigate the cause of the fire. Nothing like this has ever happened before, Iatsenia said.
UCPD could not be reached for comment as of press time...
Full story at http://www.dailycal.org/2018/12/14/kiwibot-catches-fire-outside-mlk-student-union/
We are at a loss for words, which is a problem if you don't have the right words for robots:
Posted by California Policy Issues at 8:31 AM