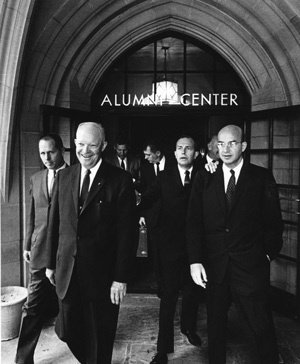 Not a lot happening in the university as we get into this time of year. So here is a phone of ex-President Eisenhower getting an honorary degree from UCLA in April 1965 (or maybe 1963).* Clark Kerr is at right. There is no particular reason to show this photo today EXCEPT that Eisenhower, as president, declared December 17th to be Wright Brothers Day back in 1959. (Dec. 17th is the anniversary of the first flight by the Wright brothers in 1903.)

Source and text of proclamation: https://www.presidency.ucsb.edu/documents/proclamation-3315-wright-brothers-day-1959
===
*For the source of the uncertainty on the year, see:
https://uclafaculty.org/2010/09/08/ucla-history-honorary-degree-in-63/ and
https://uclafaculty.org/2011/02/20/ucla-history-former-president-receives-honorary-degree/
Posted by California Policy Issues at 8:35 AM