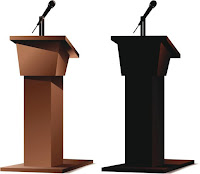 UCLA is reported to be hosting the one debate between the two candidates for the U.S. Senate - Kamela Harris and Loretta Sanchez - on October 14. Under the top-2 primary system, the two candidates with the most votes, regardless of party, become the competitors in the general election. In this case, both candidates are Democrats.

More info at http://dailybruin.com/2016/09/07/ucla-plans-to-host-debate-between-senate-candidates-sanchez-and-harris/
Posted by California Policy Issues at 11:00 AM