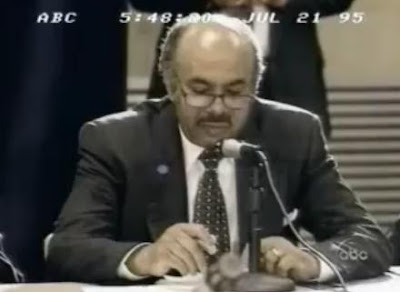 Former UC Regent Ward Connerly who led the move to abolish affirmative action at UC in 1995 is back in the news, albeit not in a positive way.

http://www.insidehighered.com/quicktakes/2012/01/18/allegations-against-prominent-foe-affirmative-action  (There is a link within that link to a NY Times article with more detail.)  A related news item appeared in the Sacramento Bee this morning:

The news clip below describes the Regents’ action but focuses on then-Governor Pete Wilson.  (Connerly is briefly shown.)  The Regents’ resolution was made redundant by the later Prop 209 and the resolution was subsequently repealed.  However, since UC is covered by Prop 209, the repeal was symbolic.

As a prior blog post noted, this week's Regents meeting is likely to be less controversial.

News video from 1995:
Posted by California Policy Issues at 7:29 AM