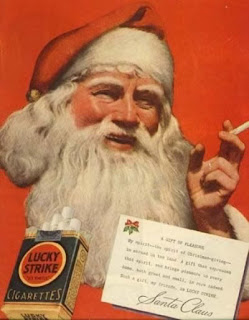 LA Times editors think that if Santa Claus can smoke, folks at UC should be able to smoke, too.

There's nothing to say in defense of cigarettes. Smoking is a detestable, dangerous habit — but it's also a legal one, and there is plenty to say in defense of allowing adults to make bad decisions if they're not breaking the law or harming others. The University of California should have taken that into account before UC President Mark G. Yudof announced that all 10 campuses would become smoke- and tobacco-free within two years. As long as smokers aren't filling others' lungs with second-hand smoke, the university shouldn't outlaw them…

Sing along with the LAT!
Posted by California Policy Issues at 9:39 AM