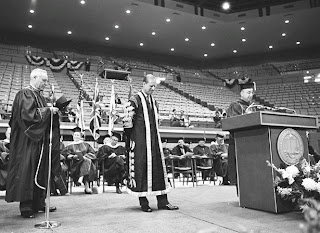 Because of the Japanese Garden issue, blog readers might be interested in Regent Carter (at left in the 1966 photo above with UC President Clark Kerr at right giving presentation to Prince Philip).  Ultimately, the Japanese Garden was a gift of the Carter family.

Here are some excerpts and links:

From the Harvard Business School:
Carter developed the first suburban shopping center in 1947 in Los Angeles and popularized regional chain stores. Carter started with three regional stores in Los Angeles in 1946, and by 1980, had grown that number to 47. Carter expanded the company nationally through acquisitions, such as the Weinstock stores, Neiman-Marcus, and Waldenbooks. When Carter took over the Broadway Company, annual sales were $30 million. By 1980, the chain under a new name, Carter Hawley Hale, was the nation’s fourth largest department store chain with sales of $2.4 billion.
http://www.hbs.edu/leadership/database/leaders/edward_w_carter.html

From LACMA:
In Los Angeles, the presence in the community of a museum devoted entirely to art was little more than a hope before 1945. Only in 1965 did a proper building, LACMA, open its doors to the public. The late Edward W. Carter was a successful businessman and philanthropist, and an indefatigable promoter of cultural institutions in Los Angeles. It was Carter who negotiated with the County of Los Angeles for the new museum’s site in Hancock Park, for the funds to maintain the new museum, and for the transfer of art from the museum’s parent institution, the Los Angeles Museum of History, Science, and Art. Carter was LACMA’s founding president (1961–66) and trustee (1962–96). In these capacities, and as chairman of LACMA’s board of trustees, Carter exercised profound influence on the museum’s creation and evolution. In 1989, the year he was replaced as an active trustee by his wife, Hannah Locke Carter, Edward Carter was named Honorary Life Trustee.
http://collectionsonline.lacma.org/mwebcgi/mweb.exe?request=record;id=501403;type=802

From the New York Times:

He was appointed to the University of California's Board of Regents in 1952 by Gov. Earl Warren. He served for 36 years, helping guide the university through the student unrest in the 1960's and advising it on financial matters and investments.
http://www.nytimes.com/1996/04/27/us/edward-w-carter-84-retailer-and-a-pioneer-of-shopping-malls.html

Even before joining the Broadway Department Store as executive vice president in 1946, Carter was well known in retailing circles. Besides his six years with Silverwoods, he also spent eight years at May Co., rising to the post of divisional merchandise manager. In addition, he was an account manager with the Scudder, Stevens & Clark investment firm in Boston.  Carter became president of the three-store Broadway chain in 1947, taking charge of a concern that he later said ranked "last among Los Angeles department stores in both size and in stature."
Within months, Carter built one of the nation's first suburban shopping centers, the Crenshaw Center, on a former golf course. (The Baldwin Hills-Crenshaw Plaza sits there now.) During the boom years after World War II, Carter studied the freeway map and built his stores accordingly.  To finance his ambitious expansion plans, Carter sold stock to Hale Bros. Stores of San Francisco in 1949, and the two chains merged in 1950 to become Broadway-Hale Inc. As with all of Broadway's later acquisitions, the Hale operation retained its name and management and was run as a separate division.  Other acquisitions followed with such respected names as Emporium Capwell, Neiman Marcus, Waldenbooks and Bergdorf Goodman. Carter was considered well versed in consumer trends and an innovative merchant who chose a decentralized approach to retailing that allowed Broadway-Hale's various chains to operate independently with substantial autonomy.
http://articles.latimes.com/1996-04-26/news/mn-63073_1_los-angeles-department-stores
Posted by California Policy Issues at 1:41 PM