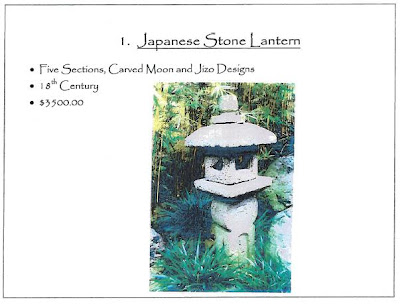 UCLA provided a listing with pictures of various objects – with valuations – located at the Japanese Garden to the California Garden & Landscape History Society.  The first page of the listing is shown above.   Apparently, the original plan was to remove and perhaps sell all the objects.  Now it appears that three objects will be removed and put in the Fowler Museum collection on campus.  Numbers 11, 21, and 22 on the listing (see link below) are definitely to go to Fowler.  Numbers 2 and 19 will, for the moment, remain in the garden and might later be removed (maybe to Fowler? – unclear).  Certain bonsai plants are apparently going to be given to heirs of former Regent Carter who donated the garden.  Other objects listed will remain in the garden when it is sold.

There is some reference to photographic or other “documentation” of the garden that would be (may already have been?) undertaken, possibly arranged by the California Garden & Landscape History Society, before the garden is sold.

The vagueness in this blog entry is due to incomplete information.  It is also unclear who the buyer of the garden might be, what preservation conditions – if any - might attach to the sale, what the Carter family’s input has been, legalities surrounding the original donation of the garden, how much revenue the sale might bring, how the particular uses of the sale proceeds were determined, etc.

Below is the listing with pictures from UCLA.  It will appear sideways on your screen.  But you can download the file from the link source.
Open publication - Free publishing - More ucla