We noted yesterday that shortly before the Friday-midnight deadline set by UC president Napolitano for graduate students at UC-Santa Cruz to end their strike, she issued a letter saying there would be/could be some kind of discussions with the UC Graduate and Professional Council. So, what is that Council? It is not the union that represents graduate students with which UC currently has a contract in force. According to the Council's website:

Graduate and professional students represent a large portion of the academic workforce who must balance the challenges of being both student, employee, and teacher. The University of California Graduate and Professional Council emerged out of a pursuit to inspire and support our unique community, and a desire for actions to speak louder than words. Established in 2017, we’re an organization driven by progressive ideas, bold actions, and a strong foundation of support.

The masthead of the Council's website - see below - lists UAW as one of "our partners" along with UCOP. But there is nothing besides a link to the UAW 2865 at that listing on the website which suggests any formal relationship.

Here is the problem. Under state labor law - which is essentially copied from federal labor law - the union is the exclusive bargaining agent for the grad students. The university cannot negotiate changes in wages, benefits, or working conditions for the grad students with any entity other than the union. Even if it wants to improve wages, benefits, or working conditions above levels in the current contract, it must negotiate in good faith with the union. The university could very loosely "discuss" relevant matters with the Council. Since labor law operates within a kind of "don't ask/don't tell" structure, the union could even in some sense acquiesce to such discussions with the Council that were more than loose discussions.

UAW 2865: NAPOLITANO SHOULD BARGAIN WITH THE UNION THAT REPRESENTS STRIKING GRAD WORKERS, NOT CIRCUMVENT IT, TO MAKE PROGRESS ON COLA

It might also be noted that the Council's list of campus representatives indicates that the Santa Cruz position is currently vacant. See below: 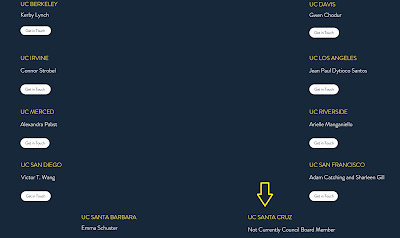 As we have noted in prior posts, the university's position is that it negotiated the current contract in good faith with a fixed duration that has yet to expire and, therefore, as a matter of principle, the contract should be honored. The union is technically honoring the contract by not being officially involved in the strike. And, as we have also noted, the union does have an interest in having contracts it signs with UC be binding in fact for the sake of future negotiations.

But the world is what it is. The best way out of the current dilemma could be some kind of arrangement whereby the contract is not technically reopened but a satisfactory deal is reached. There are professional neutral mediators available to both sides who might assist in coming up with a compromise. It is not at all clear that the Council could play the mediating role in current circumstances. On the other hand, UC Regent Chair John A. Pérez, with his labor and political background, might well be able to assist in finding a solution or in finding someone who could.
Posted by California Policy Issues at 7:08 AM