No UC in State of the State 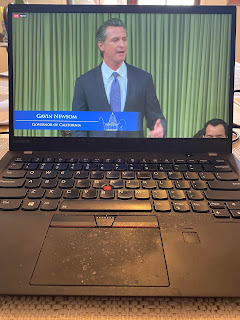 We had earlier alerted blog readers to Gov. Newsom's then-forthcoming State of the State address, which took place yesterday.* One possibility was that he would mention something about UC or higher ed. As readers will know, the Regents had a tuition increase item scheduled for action at their last meeting, but then withdrew it and postponed any action until a later date. The governor might have reacted - but he didn't. In fact, in contrast to his prior State of the State in which he discussed virtually everything to the point where he was criticized for not setting priorities, this time he discussed only homelessness.

An annotated version of his speech can be found at:
https://calmatters.org/projects/newsoms-state-of-the-state-2020-annotated/

So this time around, he does have a priority. But UC and higher ed ain't it.